Architecture provides a bridge to nature for a waterfront dwelling

Tom Kundig—principal of Olson Kundig, a Seattle-based design practice—is well aware of the challenges associated with building in the Pacific Northwest. “It already is a landscape that is overwhelmingly beautiful—your eye is going to be focused on that.” In such an environment, Kundig sees architecture as playing a supporting role, providing a “bridge between nature, culture and people.”

Located amidst the San Juan Islands, which straddle the border between Canada and Washington State, this one-bedroom cabin in the woods was commissioned by celebrated philanthropist Janet Ketcham. Ketcham intended for the residence to be primarily enjoyed by the next generation, her children and grandchildren, so the weekend getaway house is a stone’s throw away from the family’s main domicile. “Interior and exterior become one and the same.”

Engineered to take advantage of the complete cycle of seasons, the adaptable design allows for the pavilion walls to be thrust open in the warmer months, dissolving the distinction between site and landscape. “Interior and exterior become one and the same,” the architect contends. The home’s striking, all-black exterior is achieved through a technique called shou-sugi-ban, an ancient Japanese practice of charring wood that makes it less susceptible to fire, rot and insects. In addition to these practical benefits, the semi-reflective finish helps the home blend into its dark, wooded surroundings.  “All you’re doing is hiding the coloring of the building, picking up the darker colors of the ground, and the bark of the trees,” Kundig told Metropolis Magazine, who first featured the residence. “The copper finish of the Washington Skeleton™ Side Chair strikes a note of contrast, while harmonizing with other elements of the [home's] design.”

Some of the home’s furnishings and fixings were integral to the home’s design, like the space-saving, collapsible Murphy bed; others represent the contemporary tastes of the owners. Against the alternatively dark and warm wood tones, the copper-aluminum finish of David Adjaye's Washington Skeleton™ Side Chair strikes a note of contrast, while harmonizing with other elements of the design, like the building's cantilevered second story. 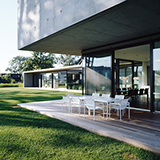 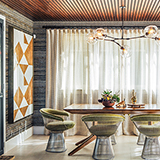 Palettes
Go with the FLO