On Thursday, February 4, 2016, the Associate Curator of Textiles at the Cooper-Hewitt, Susan Brown, will host Design Talks: Finding Patterns with David Adjaye, the international architect and designer. For the 12th exhibition in the Selects series, David Adjaye was asked to curate a selection of African textiles from the museum’s permanent collection. The upcoming conversation will focus on the relationship between textiles, design and architecture in Adjaye’s work—e.g. "Is architecture a form of weaving?"—concluding the events surrounding David Adjaye Selects, which opened June 19, 2015 and will close February 14, 2016.

Still on display at the Cooper Hewitt are pieces from the museum’s archive, combined with those from Adjaye’s own “library of patterns,” that inform and inspire his architectural practice. Highlights include an Asante kente cloth from Ghana, a bogoloanfini mud cloth from Mali and a Yoruba indigo-dyed wrapper from Nigeria.

These and other textiles provided the inspiration for David Adjaye’s debut textile collection, produced in collaboration with Dorothy Cosonas of KnollTextiles. The Adjaye Collection was designed to coincide with the Cooper Hewitt Selects exhibition, demonstrating the ongoing influence of these historic textiles to Adjaye’s contemporary practice. “These textiles are not simple artifacts of a cultural past,” says Adjaye, “but in fact material representations of the significant changes and ruptures in the daily lives of their crafters. The textures and patterns found in the collection have powerful effects on perception in ways that alter our relationship with space and surroundings.”

For ticket information, visit EventBrite. In the event that the talk is sold out, one can find a live broadcast of Susan Brown and David Adjaye's conversation on Cooper-Hewitt’s website, here. 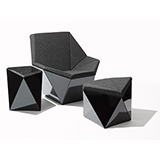 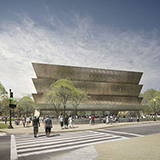 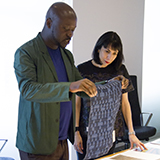