The influence of the late Massimo Vignelli continues to be felt today. With designs ranging from dinnerware to furniture—including the PaperClip™ Table and Handkerchief Chair for Knoll—Vignelli’s take on modernism was both restrained and minimal in its system. When he replaced Herbert Matter as Knoll’s in-house graphic designer, Vignelli redesigned the company’s corporate identity and standardized graphic systems across price lists, brochures and marketing materials.

Among his most ambitious projects, the 1970 redesign of New York City Transit Authority’s (NYCTA) graphic systems affected millions of New York’s commuters. Massimo Vignelli and Bob Noorda issued the NYCTA Graphics Standards Manual as an antidote to the chaotic and inconsistent signage that had developed organically over the course of six decades.

That manual has been reissued by Pentagram’s Jesse Reed and Hamish Smyth. After the pair came across a copy in Pentagram’s archive, the two photographed every page and, with the help of fellow designer Niko Skourtis, put the manual on the Internet. To their surprise, it became an overnight sensation. However, neither Reed nor Smyth was satisfied with the quality of the digital conversion, and embarked on a Kickstarter campaign to bring the project to print.

Reed sat down with Knoll Inspiration to discuss Vignelli’s career and legacy, the process of funding their project through Kickstarter and the past and present history of the New York subway system’s signage. “Just like a mathematical formula calculated by hand instead of a computer, it’s important to understand the work behind the solution.”

KNOLL INSPIRATION: What made you want to reissue the Graphics Standards Manual for the New York City Transit Authority, designed by Massimo Vignelli and Bob Noorda?

Jesse Reed: This journey started by coincidence. After we found the manual in Pentagram’s basement, we poured through every page, one by one. What struck us the most was how prescriptive the text was for every component—we instantly knew that more designers needed access to this material. Most of us [who were around during the discovery] had seen visuals of the manual before, but would have never had the chance to read it. This prompted us to photograph every page and make a website. We did it really quickly and didn’t take much time to craft the presentation, but to our surprise, the site got over 250k unique hits in the first week. A year or so later we began working with the MTA on a few Pentagram projects. We had thought from the beginning that this would make a great book, so we finally decided to ask if they would be interested in doing the project. They said yes.

New York's subway signage after the redesign by Massimo Vignelli and Bob Noorda of Unimark in 1970. Image courtesy of MTA.

Can you talk a little about the typographic landscape of the New York City subway system before its standardization in 1970?

Starting in 1906 the New York City subway consisted of three separate train lines: the Interborough Rapid Transit Company (IRT), Independent Subway (IND) and Brooklyn-Manhattan Transit Corporation (BMT). Because they weren’t an interconnected group of agencies, all of the visual wayfinding was completely different. This caused difficulties especially for visitors of the city, and made it almost impossible to easily transfer from line to line. A detailed account of this environment can be found in Paul Shaw’s book, Helvetica and the New York City Subway System: The True (Maybe) Story. “Because the New York City subway consisted of three separate train lines, all of the visual wayfinding was completely different, [making] it almost impossible to easily transfer from line to line.”

Luca Vignelli, the son of Massimo and Lella Vignelli, contacted you after you both began this project. What was the upshot of that conversation?

I’ll never forget this day. Hamish and I were having lunch with Alex Daly, our campaign manager, and I received a voicemail on my phone. The number was unknown—“Hello, Jesse, this is Luca Vingell.” My stomach sank, we thought for sure something was wrong. Fortunately, Luca was calling us to say congratulations and offer his assistance. He generously provided his father’s personal copy to use for the final scanning and reproduction. In doing so, we were able to find a few hidden gems that weren’t included in Pentagram’s copy. The first was a hand-drawn plane icon (the same as you see it today). The second revealed PMS numbers on the individual chips for the different train lines—ours were completely solid. In 1967, Robert Cadwallader, the recently appointed head of marketing at Knoll, enlisted Massimo Vignelli to redesign Knoll’s corporate identity, brochures and price lists, elements of which persist to this day. What’s the connection between the Vignelli’s work at Unimark and his concurrent work on Knoll’s graphic identity?

I can’t speak with great authority on this. From an observational perspective, the two systems look similar on the surface, but are inherently different in terms of purpose. The most obvious similarity is the typeface—NYCTA uses Standard Medium while Knoll uses Helvetica. The two typefaces often get confused.

The biggest difference is found within function. The Subway system was a public utility and the words, letters and numbers needed to facilitate the communication. On the other hand, the Knoll identity is heavily supported by imagery—furniture, textiles and ideas of the company. Massimo’s wordmark is there to simply endorse the images—it doesn’t distract or engage, the beauty emerges by way of phonetics. Saying the word aloud is more poetic than expressive typography ever could be. “Massimo’s wordmark is there to simply endorse the images—it doesn’t distract or engage, the beauty emerges by way of phonetics. Saying the word aloud is more poetic than expressive typography ever could be.”

'The Grid' as conceived and implemented by Massimo Vignelli during his tenure at Knoll, 1967-1978. Image from the Knoll Archive.

This was an ambitious undertaking. It took Massimo and Bob Noorda four years to complete the original project for Unimark. How long did it take you? What was the process like?

It took us approximately seven months to complete the project. This involved a lot different aspects, from making the video, running a campaign, designing the book, going on press, and coordinating all of the deliveries—in that order, with a lot of detail being spared. The first time around was definitely a learning experience for both us. We’re used to designing books, but it’s a whole different world when you’re faced with funding, producing and fulfilling the orders, especially at a high volume and around the world. We worked with a lot of really great people who led us in the right direction. From the team who ran our campaign, to the legal guidance, to the printers in Italy—we got schooled on a daily basis, and it was amazing. As you mentioned, you’ve worked on book designs before. Can you elaborate on how this project differed from your professional work at Pentagram?

The main difference is that we were creating the content. Most of the time a client will come to us with the guts of a book all figured out, and it’s our job to organize it, communicate it properly and (most of the time) refrain from commenting on what it says. Further than that, while we could recommend the nicest production methods available, there’s typically some compromises we have to make due to the client’s taste and/or budget. With this book, we had free reign. No compromises were made and we were 100% invested in making sure the content was captured perfectly. It’s every designers dream to create something they love and do so without restrictions. “We got schooled on a daily basis, and it was amazing.”

What, in your minds, accounts for the enduring importance of this document?

The manual represents an early example of critical design thinking and the visual analysis. Students and young professionals need to see, and read, manuals like this to understand the focus required to do the work we do. At the end of the day, it’s about problem solving and communicating the solution—I don’t think there’s a bigger mess to untangle than the New York City subway system. There probably are, come to think of it, but this one  sets the stage. Lastly, the NYCTA Manual reminds us of our craft. Every diagram in the manual was drawn by hand. Of course, we don’t do that today, but just like a mathematical formula calculated by hand instead of a computer, it’s important to understand the work behind the solution. As part of this year’s Designers & Books Festival, which took place October 2 - 4, you gave a talk at the Fashion Institute of Technology (FIT) about financing design books through Kickstarter. Can you talk about having the chance to interface with those who helped fund the project? What kind of questions did you field?

Speaking with people who backed the project was really fun. It was nice to hear what they thought of the book and their own personal connection to the manual. Some people grew up knowing Massimo, others simply appreciate the beauty of this system, even if they’re not designers.

At this fair specifically, it was even more exciting to speak with other publishers. I’ll be honest, I was a little worried in the beginning that we’d be viewed as these new kids coming in and messing up the traditional publishing world in a bad way. On the contrary, a lot of the booksellers and older publishers were extremely supportive of what we were doing and lent us their expertise. “With this book, we had free reign. No compromises were made and we were 100% invested in making sure the content was captured perfectly.”

Since completing this project, you have begun working on the 1974 NASA Graphics Standards Manual—another iconic reference text. Can we expect an on-going series? What’s next?

We have a few more projects on deck. Nothing we can speak to at the moment, but they go in a totally new direction in terms of subject which will keep these projects interesting. A lot of people wondered if we were sticking to transportation- or city-specific manuals, but that won’t be the case. I’m more interested in exposing the diversity of standards manuals as it applies to utilities, corporations, entertainment, etc.

For purchasing information on the full or compact editions of the NYCTA Graphics Standards Manual visit www.standardsmanual.com.

All images are courtesy of Pentagram unless otherwise noted. 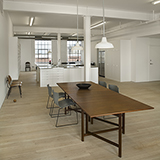 Palettes
In the White Room with No Curtains 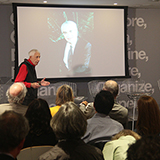 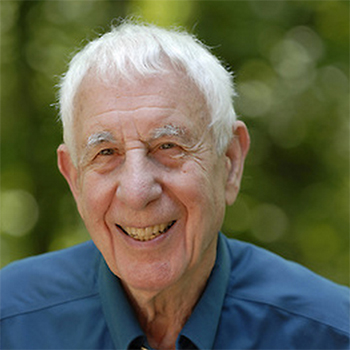 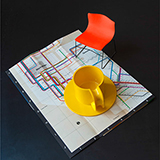