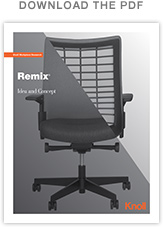 Some chairs are all that they seem at first glance and some are decidedly more. In the case of the new Remix chair, a quick look doesn’t allow enough time to recognize its many features.

Yes, the contoured upholstered back instantly conveys comfort, but it’s only after sitting in it that you can fully appreciate the chair’s responsiveness and flexibility. “So many people make a decision about the comfort of a chair before even sitting in it,” observes Benjamin Pardo, Knoll’s Executive Vice President of Design. “And once a chair looks comfortable, it actually has to be able to deliver on the message it sends,” he says. In the case of Remix, there is a lot more in the way of comfort than initially meets the eye.

For those taking a closer look, there are indeed clues. Seen from behind, Remix’s back is wrapped with a flexible lattice, indicating an ability to respond to the movement of users. In fact, this lattice is essential to both creating and delivering Pardo’s intended message. This dual interest in exploring the visual legibility of products—how, say, a chair might communicate its functionality—while embedding high performance features has become a hallmark of the long-standing collaboration between Knoll and Formway, the New Zealand design collaborative.

Together, Knoll and Formway created the Generation family of chairs, setting the standard for dynamic design. Now, with the introduction of Remix, they are further elaborating Generation’s central premise that sitting at work is not a single, static position but an ever changing assortment of postures as people move through a variety of tasks, injecting vitality into the stagnant realm of upholstered seating. Formway’s Chris Bisman, Lead Designer, maintains that the migration to the more traditional sector of the seating market is actually in keeping with the firm’s forwardthinking reputation. “Performance excites us,” says Bisman. “We accomplished high performance with Generation. We realized we could apply those ideas in a new part of the market.” And, based on Formway’s study of available products, traditional seating showed ample room for improvement. “We look for where innovation isn’t and this clearly is an area where innovation had not been paid attention to as, in general, seating has gradually shifted to a less upholstered appearance,” explains Vice President of Marketing for Knoll, Alana Stevens.

Kent Parker, Formway’s Joint General Manager, has called the Formway team of designers, engineers and researchers the “trainspotters of the furniture industry.” He and his colleagues are obsessively examining the minutiae of difference among seemingly similar products all the while studying the particularities of human behavior that might be translatable into product design. What’s more, Formway begins each new project with a blank slate, abandoning any preconceptions. “We are physically disconnected from each other,” explains Bisman of the some 9,000 miles separating Formway and Knoll, “and so they rely on us for a fresh set of eyes.” Whether Formway’s welcome remove from the trend-sensitive hubs of the furniture industry or the interdisciplinary composition of the design team is responsible for the clarity of their analysis, the three-part “discover, design, deliver” process served them well in developing a new type of upholstered seating, their fourth work chair with Knoll.

This dual interest in exploring the visual legibility of products while embedding high-performance features has become a hallmark of the long-standing collaboration between Knoll and Formway. 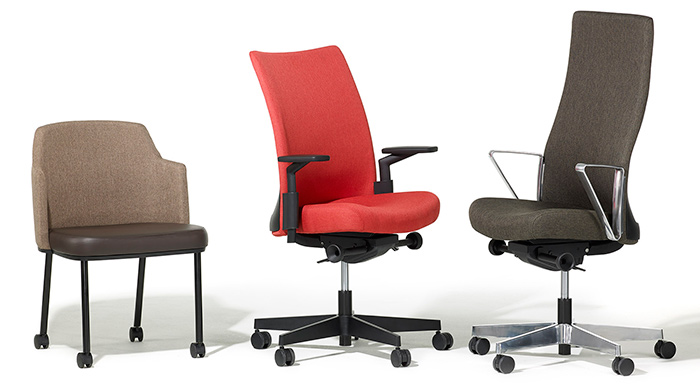 The Remix family of seating consists of a high back chair, a work chair and a side chair.

“In general, if you’re looking at an upholstered product, you would be disappointed at its performance,” maintains Paul Wilkinson, Formway’s Joint General Manager. Stevens echoes this assessment. “Traditional upholstered chairs have an unforgiving structure,” she explains. “The back is typically a hard surface with a piece of foam and upholstery on it. You sit down and you are immediately up against a hard surface and there’s a tendency to over-compensate for this with padding.” From the start, the goal of Remix was to eliminate the hardness while providing a streamlined silhouette. During development, its working title was “Tailored Performance,” which today stands as its mission statement. It’s a deliberate expression of the dual nature Formway captured in its design—dignified and agile, dependable and flexible, established and up to date. 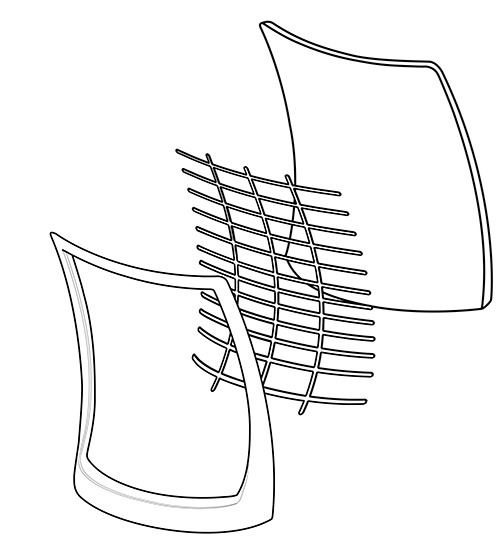 Furniture industry research has shown that most offices today are populated by a wide age range of workers from baby boomers to members of Generation Y, all of whom may have different aesthetic preferences. They are, however, able to find common ground on meaningful performance features, embracing technology as a tool for streamlining workflow and not as a series of temporarily amusing special effects. For the Remix design team, this meant paring down the chair’s features to those that are most essential and truly innovative and allowing for personal choice in how and when to engage them.

Remix builds on Generation’s innovations, taking, as its name implies, strands of its predecessor’s DNA, such as the application of a high-performance elastomer, and reusing them in a new way. In Generation, the elastomer is stretched in one direction—horizontally—across the front and back of the chair and in Remix it is stretched both horizontally and vertically across just the back, creating the flexible lattice. Called the Flex Net Matrix, it allows the chair to conform to the shape and seating position of its occupant while providing support and flexibility for the back and shoulders. While Generation relishes its athleticism, exposing its entire structure, Remix keeps it partly under wraps, projecting a more buttoned-up appearance in front with its taut fabric upholstery. The contrasting stitching in the corners of the backrest further enhances the suiting image. While the Flex Net Matrix is essential to how Remix performs, it’s the upholstered cushions that are critical to its appeal to users. “There’s a slight inward curve to the back so that it feels like it’s wrapping around you,” says Carly Cooper, Product and Marketing Manager, Knoll Office Seating. This enveloping gesture is part of the overall goal of ensuring that users aren’t hindered by hard surfaces or other obstructions. With that in mind, armrests are attached to the back of the chair, allowing more clearance at seat level and making side seating possible.

And don’t be misled by the classic shape of the seat as here, too, there is more than meets the eye. “The top surface of the seat looks simple, but underneath the thickness varies and there is a mechanism there that is quite complex,” explains Wilkinson. Tucked beneath and partly concealed by the seat’s waterfall edges, the synchronized tilt tension allows for a maximum recline of 28 degrees. “The use of technology is not always obvious, but it’s certainly there,” says Khalid Masoud, Lead Design Engineer for Knoll. Three distinct recline tension settings and an adjustable seat depth give users of all sizes the ability to modify the tilt and seat position to suit personal preference. And there’s room for self-expression with the selection of the chair itself as the Remix family of chairs includes three versions—work chair, high back chair and side chair.

After nearly a decade and a half of collaboration, the accumulated trust is paying off for Knoll and Formway, particularly when it comes to solving technical issues. “Overall, the team has become more effective in pushing boundaries and is more open to innovation,” maintains Knoll’s Masoud. Formway’s Wilkinson concurs. “After all of these years of working together, we engage each other earlier in the process.” All involved agree that there’s a newfound equilibrium between what might once have been considered opposing objectives such as design and execution or performance and durability. In the case of the Remix, it is the chair’s ability to strike a balance between tradition and innovation that resonates most with Knoll’s history. As Stevens points out, “Knoll is good at developing products that are innovative at the time they are introduced and familiar after some time has passed. And then they last so long that they become iconic.”

Download "Remix Idea and Concept" to Read the Full Paper