In its December 13 article "Offices Where You Can Make Yourself at Home," the Wall Street Journal highlighted workplace design's current shift in emphasis toward social, collaborative, "home-like" spaces. The shift, the article states, has arisen to meet demands for creativity and innovation, and to attract and retain top talent.

"We have a vitality of startups and the diversity of the co-working environment and hospitality aspect all coming together and having a bigger say in how office design is shaped today," Tracy Wymer, Vice President of Workplace, Knoll, says in the article.

Among the offices highlighted is Yodle, the online marketing company that serves small and local New York businesses. The company debuted its new headquarters on West 34th Street in New York City in the spring. The office interspersed its open plan workstations, which use Knoll's Antenna Workspaces and Generation by Knoll, with Antenna Media Enclaves and casual, cafe-like zones for conversation and mobile work.

The piece situates the "home" trend in the context of office design since the 1950s, from mid-century open plan configurations to the rise of the office cubicle, its rejection, and the resurgence of the open office since the first dot-com boom in the late 1990s. Today, the open plan is accompanied by a growing diversity of spaces, both open and enclosed, from the much-publicized ping pong play areas of Silicon Valley to coffee counters, collaborative brainstorming refuges and multipurpose conference rooms. Knoll has long advocated diversity of spaces within the workplace to meet the varied and dynamic needs of the day, most recently through Activity Spaces and the r/evolution workplace activity-based planning model.

The article includes a timeline of workplace evolution, highlighting the Knoll-designed Milliken office from the 1950s and the Yodle, New York, headquarters, which uses Knoll Antenna Workspaces and Generation by Knoll. 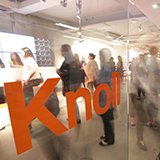 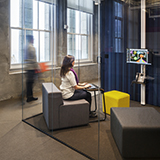 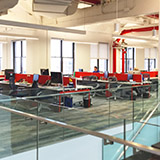