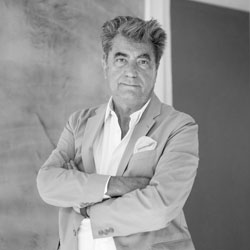 Antonio Citterio is an Italian architect, furniture and industrial designer.

Graduated from Politecnico di Milano, architect Antonio Citterio worked - from 1972 to 1981 - primarily in the field of industrial design - in partnership with Paolo Nava. Meanwhile, he pursued work on his own both in architecture and  interior design.

Between 1986 and 1996, he worked alongside his wife, architect Terry Dwan – designing buildings both in Europe and in Japan.  In 1987 and in 1994, Antonio Citterio was awarded the prestigious Compasso d’Oro-ADI.

From 2006 to 2016, Antonio Citterio was professor of Architectural Design at the Mendrisio Academy of Architecture (Switzerland). In 2008, he was honored with the title of “Royal Designer for Industry”, by the Royal Society for the Encouragement of Arts, Manufactures & Commerce of London. In 2017, at Casa Artusi, he was awarded the “Premio Artusi”, an important award that is given to people of international fame who have given their personal contribution to reflecting upon the relationship between mankind and food.

In addition to his constant work in architecture, Antonio Citterio continues his long-standing activity in the industrial design sector, working in collaboration with  world-renowned  companies. Some of his works are part of exhibitions at MoMA in NYC and at the Georges Pompidou Center in Paris.

In 2021, Antonio Citterio produced with ACPV “The Importance of Being an Architect”, a documentary film conceived as a virtual dialogue and musical journey in four acts, which investigates the responsibility of architects in building the society of tomorrow. The film has been featured in several festivals worldwide and on Sky Arte TV channel.