Inspired by the surprising strength of the apple crates he played on as a child, Frank Gehry created his thoroughly original collection of bentwood furniture. The ribbon-like designs transcend the conventions of style by exploring, as the great modernists did, the essential challenge of deriving form from function. 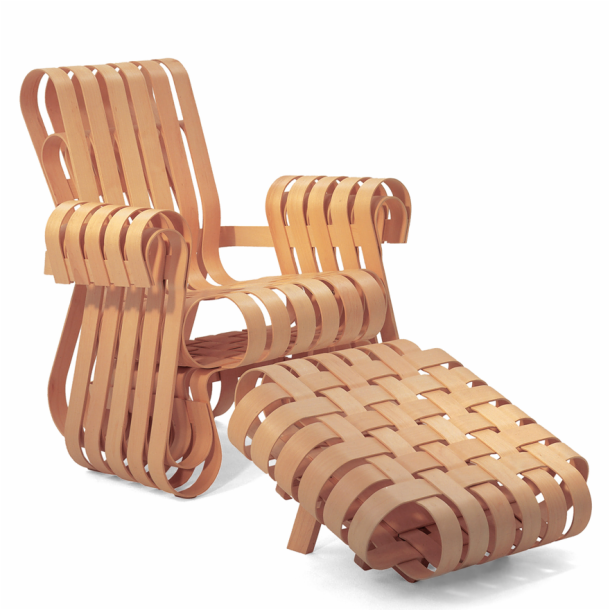 Today, Gehry's groundbreaking collection of laminated maple chairs and tables is included in the permanent collection of museums around the world.

Cushion: an optional cushion is available on request. 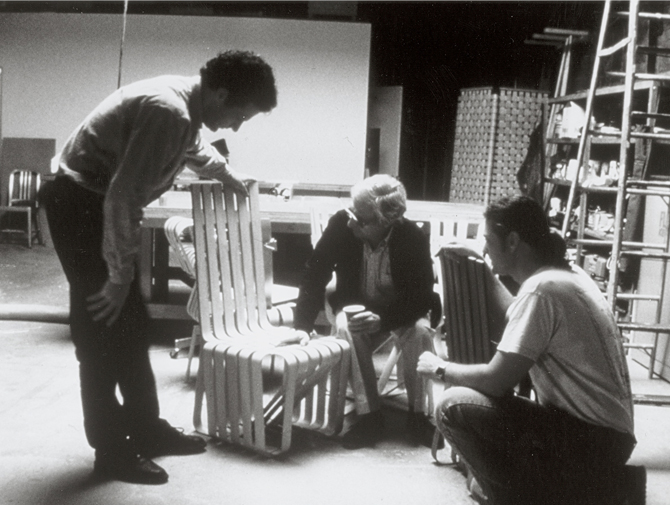 Neither party knew what lay ahead when Frank Gehry came to Knoll in 1989 with an idea for a new generation of bentwood furniture inspired by the simple bushel basket. Despite the uncertainty, a studio was set up and, fueled by mutual optimism, the investigation began.

“Everything I’ve always done has been a reaction against the usual expectations of the furniture market. I wanted the chair to come out of my own work, the shapes of my buildings… What the Knoll people first said to me was, ‘It probably won’t work, but maybe it will. You’ve been thinking about it. Something will come of it.’ All bentwood furniture until now has relied on a thick and heavy main structure and then an intermediary structure for the seating. The difference in my chairs is that structure and the seat are formed of the same incredibly lightweight slender wood strips, which serve both functions. What makes this all work and gives it extraordinary strength is the interwoven, basket-like character of the design… It really is possible to make bentwood furniture pliable, and springy and light.”* After three years of experimentation and exploration, the collection was debuted in the Frank Gehry: New Furniture Prototypes show at The Museum of Modern Art in New York. *From an interview originally run in Architectural Record (c) February 1992, The McGraw-Hill Companies. www.architecturalrecord.com. 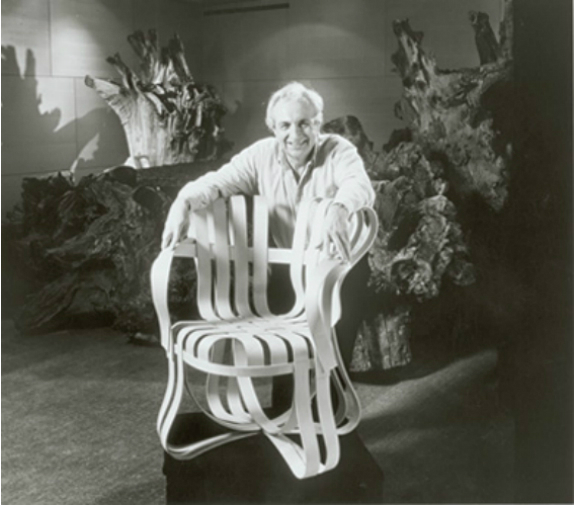 This Pritzker Prize-winning architect recently turned the Basque backwater of Bilbao into a household name with his miraculous, titanium-wrapped structure for the Guggenheim Museum's most ambitious outpost. The confidence with which he has expanded the vocabulary of architecture is clearly demonstrated in his furniture designs. Frank Gehry studied architecture at UCLA and pursued graduate studies at Harvard's Graduate School of Design.

He later worked as a designer with Victor Gruen Associates, Robert and Co. Architects in Atlanta, Pereira and Luckman in Los Angeles and André Remondet in Paris. For Knoll, he created the bentwood furniture collection (1989) and the FOG® table and chair (2000). He has also collaborated on projects with sculptors Richard Serra and Claes Oldenburg. His buildings include the California Aerospace Museum and Walt Disney Concert Hall in Los Angeles, the Fish Dance Restaurant in Kobe, Japan, the Vitra Design Museum in Weil am Rhein, Germany, and the Experience Music Project in Seattle. His collection of cardboard furniture, Easy Edges, set a new precedent for the use of materials. He has been on the faculty at Harvard and Yale, and is a Fellow of the American Institute of Architects. Mr. Gehry has been the subject of several exhibitions, including a recent retrospective at New York's Guggenheim Museum.