In anticipation of Valentine’s Day, we decided to revisit the love letters between Eero Saarinen and his wife, Aline Saarinen. Made available to the public through the Archives of American Art, the letters, dated from 1953 to 1958, represent a sampling of their overtly affectionate correspondence. In the words of the architectural critic, Alexandra Lange, "Their letters provide a sometimes shockingly intimate look at an apparent coup de foudre of two equals, both stars in their respective firmaments." A letter from Eero to Aline Saarinen. Image courtesy of the Archives of American Art.

“Now I find myself with one very great emotion—my love for you.”

Replete with pet names—including, “the most marvelous thing I know” and “the finest thing there is”—the couple's handwritten letters include cut-out paper hearts and playfully illustrated letterheads. In one particularly compelling letter, Eero iterates in twelve bullet points each one of Aline’s most fetching qualities. (Would-be paramours, take note.) Over the course of their relationship, Eero and Aline came up with more inventive ways to express their mutual adoration of one another. After their marriage, the two adopted a joint signature "AE." Eero signed his letters as "E of AE" and Aline, "A of AE," implying one was always incomplete with out the other. Before Aline met Eero in 1953, she was an accomplished art critic and editor at The New York Times. On account of the acclaim surrounding Saarinen’s recently completed General Motors Technical Center, Aline was dispatched to Detroit on assignment to interview the Finnish-born architect. Two letters written by Eero for Aline Saarinen. Images courtesy of the Archives of American Art.

As a recent divorceé, Aline became enamored with Eero before she ever saw him; after arriving at the center, Aline described falling in love with the twenty five buildings that made up the architectural compound: “The General Motors job was all and more than anyone had written about it: really a twentieth century monument, yes; ‘itself like a well-engineered industrial product,’ yes; a beautiful expression of our technology, yes; imaginative and big and wonderful in its changing relationships, yes; splendid in the carrying out of the concept down to the careful and pleasing detail, yes; a group of buildings that recognized man’s dignity vis-à-vis the machine, yes. Very human.” "The Case History of a Romance," a Valentine's day card written by Aline Saarinen. Images courtesy of the Archives of American Art.

When it finally came time for the two talk—over the course of two days of interviews and a one-on-one tour of his latest project—Eero and Aline’s romantic fate was sealed. When The New York Times published Aline's profile "Now Saarinen the Son" on April 23, 1953, it was a harbinger of wedding bells to come. They were married within the year. “I looked at you very intently and thought how much I did want to see you again.”

Aline and Eero cuddle up on a Womb Chair. Image courtesy of the Archives of American Art.

For a few years, Aline continued to comment on the contemporary art scene, but ultimately left The New York Times  to join Saarinen’s namesake firm, Eero Saarinen & Associates, as Head of Information Services. "Now Saarinen The Son" was one of the last articles she wrote, since their marriage introduced a potential conflict of interest. In a letter explaining her decision to her former mentor, the fine art connoisseur Bernard Berenson, she wrote, "Now I observe myself ardently promulgating the Eero-myth." Working for Eero, Aline was able to do just that in an official capacity. As Head of Information Services, Aline promoted Saarinen’s work to former co-workers and editors at prominent New York magazines. Due in no small part to her efforts, Eero found himself on the cover of Time magazine in 1956. A letter from Aline to Eero Saarinen. Image courtesy of the Archives of American Art.

Outside of the office, the power couple maintained an unusually egalitarian relationship for the time. Although Eero was known for working twelve hour days, he always made a point of returning home to attend, and assist with, dinner. Afterwards, the two retired to a private study, where they pushed each other on their respective pursuits. Aline often critiqued Eero's work, and he created a calendar to keep her on track for completing her book about art collectors, The Proud Possessors, which became a best-seller. “Their letters provide a sometimes shockingly intimate look at an apparent coup de foudre of two equals, both stars in their respective firmaments.”

Eero Saarinen's certificate for a trip to Madrid presented to Aline Saarinen, 1955. Image courtesy of the Archives of American Art.

Today, their correspondence remains as a testament to the couple’s enduring love, which was interrupted by Saarinen’s untimely death in 1961. Aline and Eero Saarinen boating, 1953. Image courtesy of the Archives of American Art.

In the immediate aftermath of her husband’s passing, Aline took it upon herself to burnish Saarinen’s legacy, overseeing the remainder of Saarinen’s incomplete construction projects—the TWA Terminal, the Gateway Arch, the Dulles International Airport and two buildings for his alma mater, Yale University. Inundated with requests pertaining to obituaries, Aline continued to carry out her press duties and played a major role in pulling together the 30-minute CBS special on Saarinen that ran two months after his death. After the press runs subsided, Aline edited what is still considered the most definitive book on Eero Saarinen's legacy, Eero Saarinen on His Work, drawing extensively on his personal writings, drawings, photographs and architectural ephemera. Looking back to that first meeting, Aline later reflected in a letter to Saarinen, “Waiting in the airport on those hidden chairs, [with] you in your black coat and black hat, I looked at you very intently and thought how much I did want to see you again.” “The more one digs, the more one finds the solidest [foundation] for you and I to build a life together.”

"Aline, I Love You" by Eero Saarinen. Image courtesy of the Archives of American Art.

Wishing you all a Happy Valentine’s Day from Knoll. 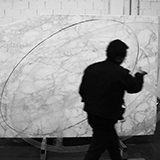 Design Pulse
Quarry to Table: A Story in Stone