When asked about Atlanta's architectural vernacular, husband-and-wife architects Jose Tavel and Cara Cummins point to the integration of indoor and outdoor spaces as a hallmark of the city’s style. Accordingly, in planning for their second home, the two made a point of allotting a large portion of the plot to create a garden retreat, complete with fountain and lap pool. Populated with cryptomeria conifers and Adjustable Chaises from Richard Schultz’s 1966 Collection, the garden, unlike most, was intended to be low-maintenance, one of the project’s most fundamental concerns. “A big thing was longevity of materials,” Tavel told Atlanta Magazine's Home, who originally profiled the residence. “We thought about what will age gracefully, so we don’t have to spend a lot of time on upkeep.” Richard Schultz’s 1966 Collection proved a fitting choice, having been designed to withstand the most punishing of tropical climates and made of materials that don’t rust or corrode. If the home’s exterior is designed as a care-free oasis, the home’s interior represents a gallery devoted to all the things the two hold most dear, including their favorite modernist designs: Marcel Breuer’s Wassily Chair and Eero Saarinen’s Womb Chair. For his part, Tavel—who wrote his dissertation on the Georgia folk artist Howard Finister’s Paradise Garden—contributed his collection of the architect-cum-artist’s work to the home's dining room. The living room walls, on the other hand, bear Cummins' influence. The large red painting is by Cummins, and depicts the nearly identical churches that frame the Via del Corso in Rome. The perpendicular wall brings together the couple's collection of African masks, creating a dramatic backdrop for the corner Womb Chair. By way of explanation, Cummins offers, “The biggest failure of modern design is when it takes itself too seriously. [There] needs to be a sense of playfulness.” 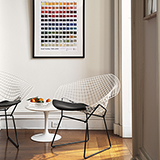