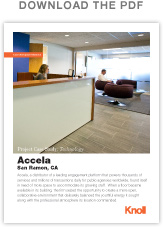 Accela, a distributor of a leading engagement platform that powers thousands of services and millions of transactions daily for public agencies worldwide, found itself in need of more space to accommodate its growing staff. When a floor became available in its building, the firm seized the opportunity to create a more open, collaborative environment that delicately balanced the youthful energy it sought along with the professional atmosphere its location commanded.

When the expansion project materialized, Accela seized the opportunity to make significant changes both visually and in work style. “We purposefully made a paradigm shift in how the office would work,” explained Darrell Lewis, Vice President, Product Management at Accela. “We wanted the fundamental guiding principles for the space to be fun, collaborative and much more open than the typical office space in the business park where we’re located.”

Based in San Ramon, CA, Accela is headquartered in Bishop Ranch, a 10-million-square foot premier business park that is home to Fortune 500 companies such as Chevron, PG&E, Ford, GE, and JPMorgan Chase, as well as smaller, growing businesses such as Accela. “While we wanted to provide things that we saw in other software companies, such as a collaborative environment, we still wanted it to feel like it belonged in a professional setting and was respectful of our surroundings,” explained Lewis.

“It was time to upgrade the space from what it had been,” explained David Howard, Huntsman Architectural Group in San Francisco. “They were in startup mode for quite awhile but now they are graduating to a really successful company.” It was time the space reflected the company’s new stage. “It wasn’t just about upscaling. It was also about appealing to talent and investors.” 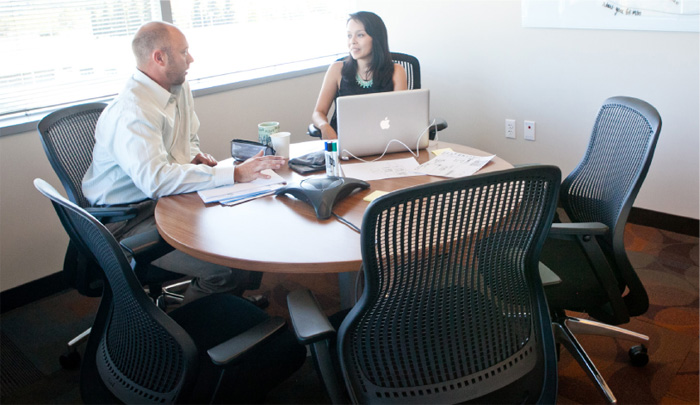 It was important to Accela that the new space provide easy access to power and data in an open environment, but not at the expense of cables running along floors and cubicles. “My vision was of a free-standing spine wall that would give flexibility,” explained Lewis, a former architect. “It would allow all the wiring to go into the wall so as technology changes—and it does—we’d have enough space to open up and adjust.”

Accela was committed to reducing private offices and creating an environment that was open and supported collaboration, according to Paul McNally of Resource Design Interiors, Knoll dealer on the project.

“They wanted a very open area, but with huddle rooms, touchdown areas and other spaces that were both open and closed,” recalled Gary Zowada, Knoll Senior Sales Associate. 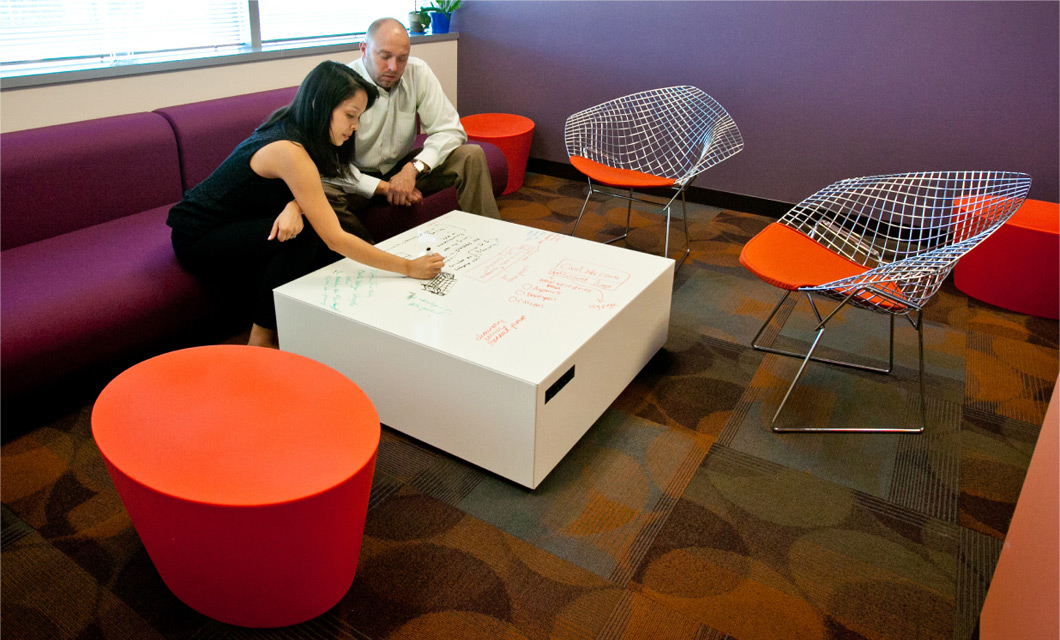 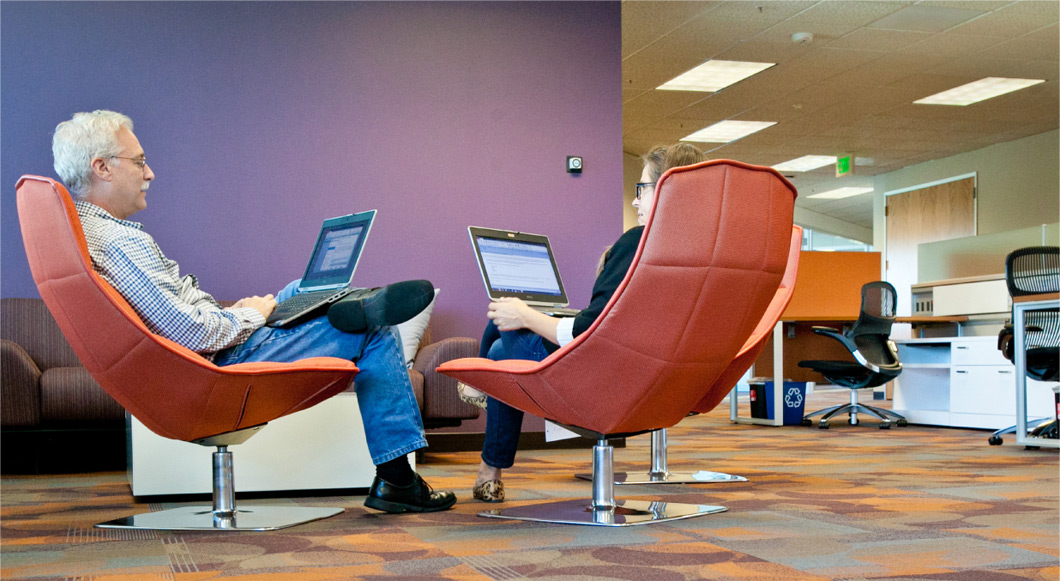 Besides being in tune to its neighbors, Accela needed to appeal to the talent that lived in its suburban location.

“We wanted to appear like a fun environment, like something people would experience in the city,” said Lewis. “But unlike many startups, we also wanted it to be secure, clean, comfortable and orderly.”

“They wanted to have some feeling of energy. That was definitely a look that mattered to them,” noted designer Howard. “But the approach wasn’t the same as doing a space in downtown San Francisco or Silicon Valley. It’s more conservative in part because of the neighborhood, which tends to attract very corporate companies.”

Workers tend to skew older as well. “Talented people who might have been in the city previously are married now, living in the suburbs with a different lifestyle. This wasn’t a case of building a campus to keep people onsite 24 hours a day. These people go home to be with their families, even though they might be working from home and dealing with international clients,” Howard explained. 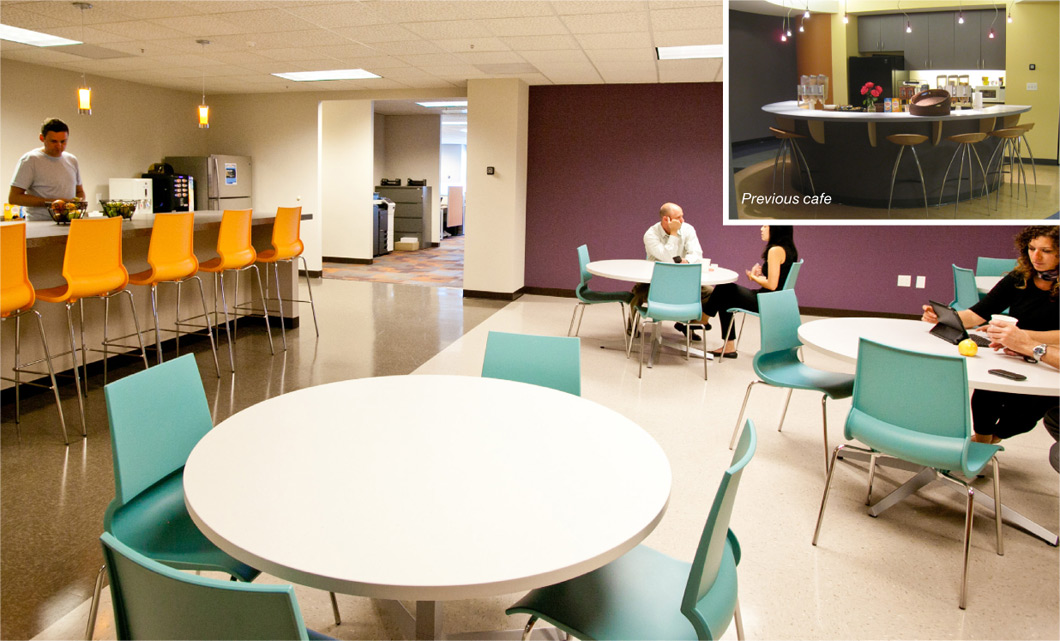 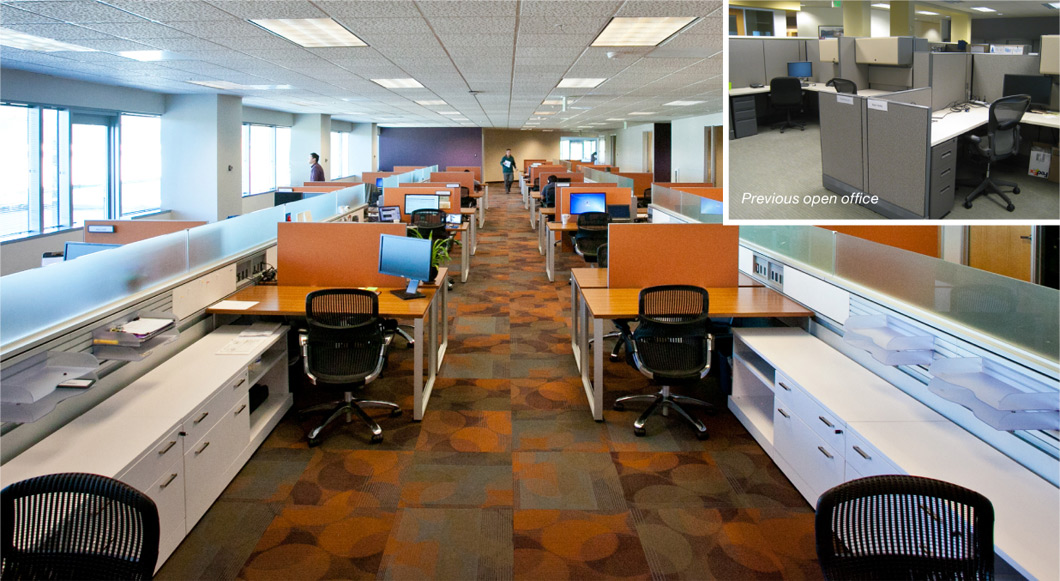 Efficiency for Today. Flexibility for the Future

As a high growth company, adaptability was a high priority. “We wanted to be sure from a furniture point of view that we had as much flexibility as possible to allow people to regroup themselves when necessary,” said Lewis.

“They wanted something they could reconfigure in the same space, and change components and surfaces without tearing out power and data,” recalled Knoll dealer McNally.

To stay on budget, planners needed to work within the parameters of the building standards. Furniture selections would have to complement the standard grade specifications, and still present the upscale appearance desired. 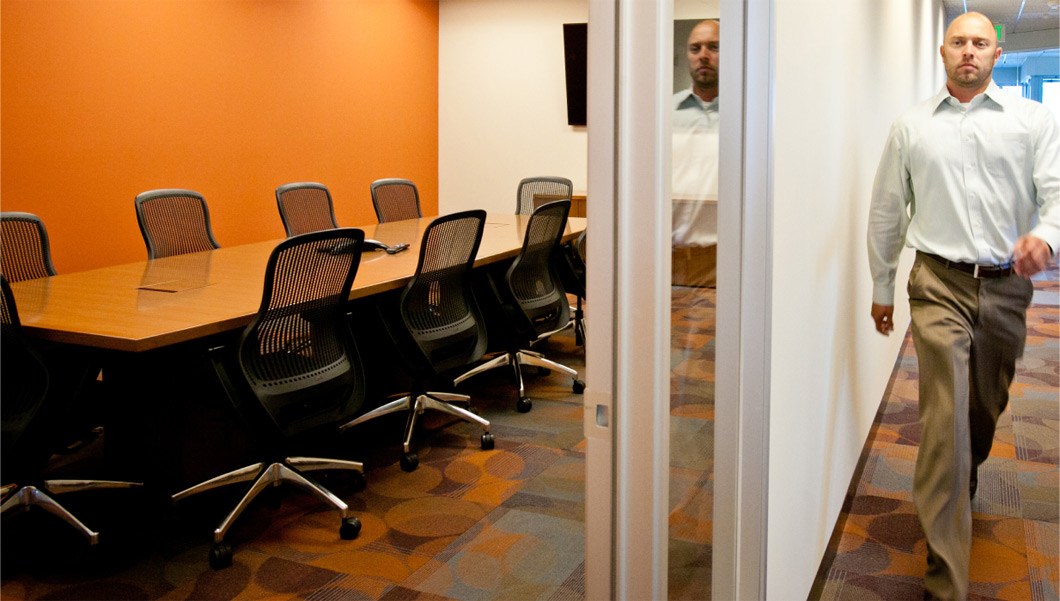 Located on the top floor of a five story building, Accela took maximum advantage of the natural light. “It was a great opportunity, surrounded by beautiful mountain views on three sides,” Lewis explained. “With so much perimeter glass, we wanted the windows to be accessible to everyone. Instead of the typical offices on the outside boundary and cubicles on the interior, we turned that around.” Spine-based System Solution.

Accela’s Lewis was elated to discover that the spine-based system he envisioned indeed existed in the Knoll AutoStrada Spine Wall. With all power and data contained in the spine, repositioning screens and worksurfaces requires no rewiring, making reconfiguration fast and easy. Combined with Reff Profiles storage, the worksurfaces in the open plan office balance efficiency and aesthetic.

As a table-based system at seated privacy height, the new workstations allow greater light than the standing height panels in the existing space.

Slight adaptations of the highly versatile AutoStrada and Reff Profiles were used in private offices, which were reduced in number from about 60% of total primary space to less than 25% and in size from 10x14 to a standard 10x12 feet. 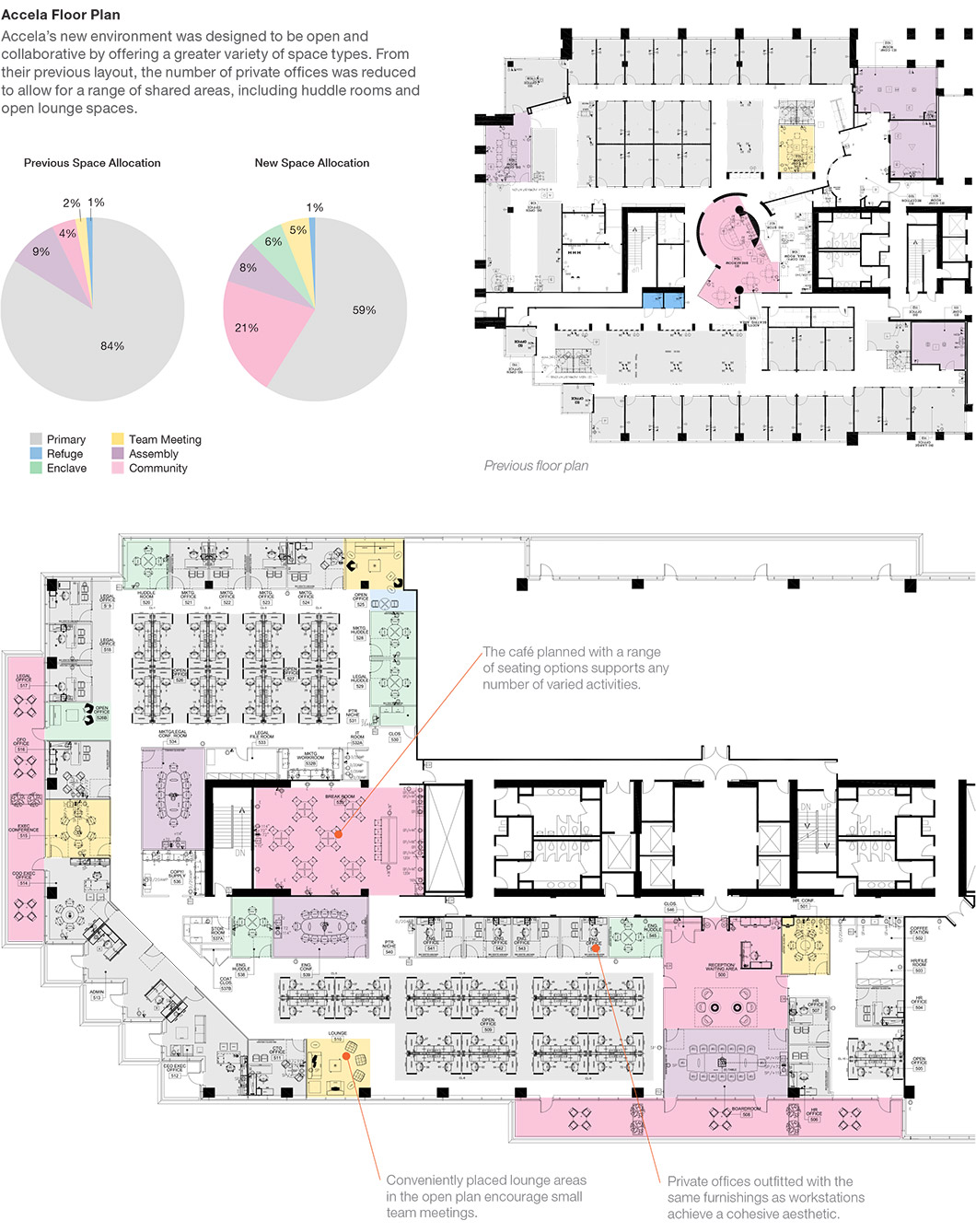 As part of the move into the new space, Accela forwent landlines and instead opted to give all employees cell phones. “We wanted to give people the choice to get up and move around as needed,” said Lewis. “Now everyone can use the entire office to support their work and not be tied to their desk.”

A Range of Activity Spaces Throughout

Primary workstations are supplemented by a range of activity spaces to support collaboration and varied work styles. KnollStudio sofas and chairs make up the many lounge areas that function as highly popular informal meeting areas. Huddle rooms and touchdown spaces range from enclaves for four to meeting rooms for six to eight. Conference rooms, the only spaces equipped with land lines, provide sound privacy for phone calls and meetings. 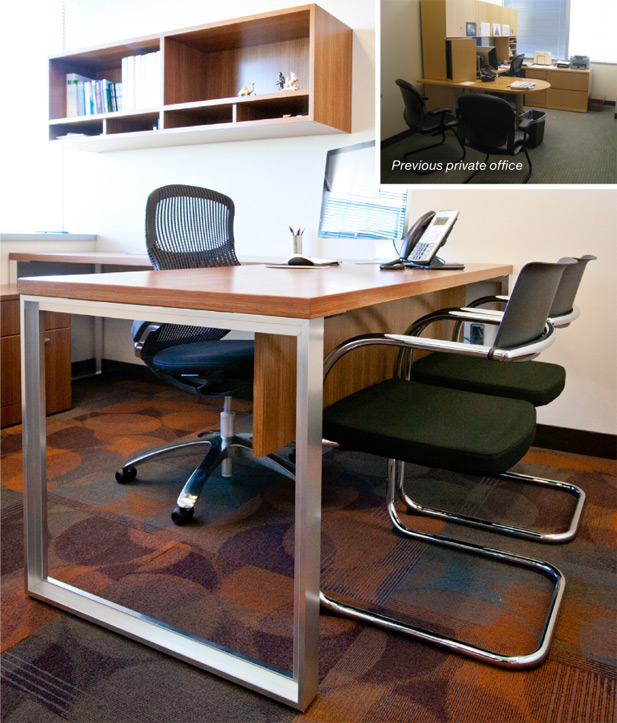 “With its focus on private offices, our old space limited interaction significantly,” Lewis explained. “The new space is based around the workstations and informal activity spaces, so it fosters collaboration between teams of workers.”

Meeting areas are well-used throughout the day. “Often in the mornings I’ll see my product management team in the lounge areas, having coffee, talking about the day,” Lewis described. “It’s not like it’s a scheduled meeting. It’s more of a chance to sit down and regroup, see what’s going on. A half hour later or so, they all go to their formal workstations.”

“The Power Cubes with marker board are really fun,” he added. “They allow people on the fly to collaborate, mark things down. The executives really enjoy walking around and seeing people’s notes and sketches. It’s a whole new way of working for us.” Besides functioning as a vehicle for note sharing, Power Cubes are popular charging station for smartphones and tablets, creating a campfire effect.

The new space has been so well received by employees, management and visitors; it has accelerated plans to upgrade the first floor quarters. Management in the Bishop Ranch Park was inspired to revamp their quarters in a similar fashion.

Efficient and Lightened Up

Not only does the spine-based system neatly house power and data and provide flexibility, it also works as the centerpiece of a smaller (reduced from 8x8 to 5x7 feet), yet more efficient workspace that accommodates a greater density of workers comfortably. “People see a smaller space, but because stations are much better designed, everything is at your fingertips,” said Lewis. “Once they sit down, they realize they have plenty of room.”

“The main thing we hear is how light and bright the space is.” McNally noted. “That, plus the vivid color make such a vibrant space.” 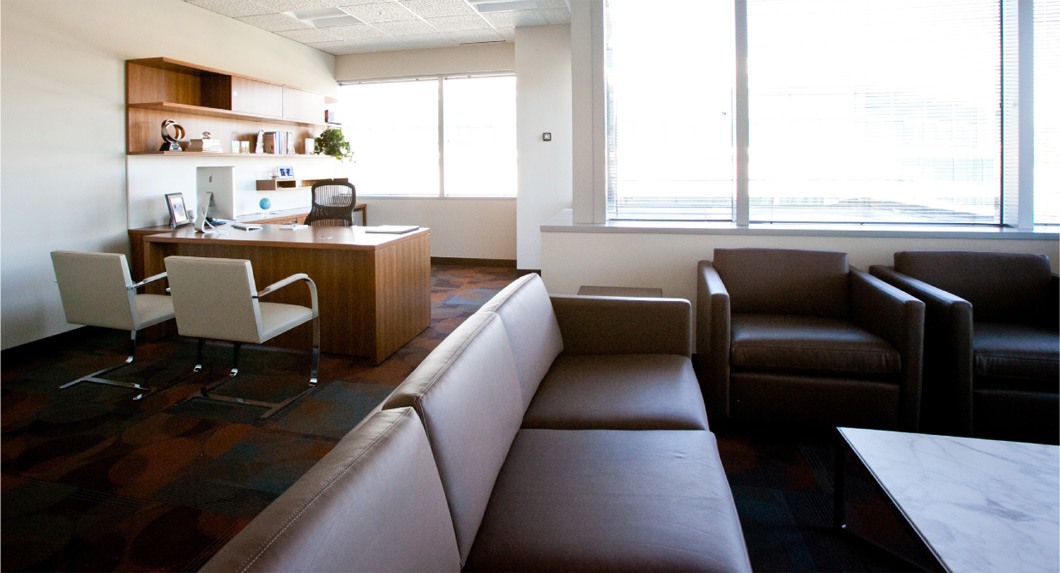 Accela moved departments that lent themselves to collaboration—product management, engineering, marketing—to the new space, with the option to regroup and reconfigure at a later time. “We tend to group people together by project or role, but we need to be flexible over time,” said Lewis. “When things shift, we didn’t want to have to reconfigure. Since all workstations are identical, when people move around, everything will be the same.”

Moving is also simplified because new workstations are designed to support new workstyles that are heavy on technology and light on paper. “We no longer needed things like cabinet storage, file cabinets or even phones. We took it down to the most essential items—computer, monitor, cell phone—and fit it to the workspace accordingly,” said Lewis.

“We went from space that was inflexible, inefficient and non-collaborative, to an environment that is open, collaborative and flexible.”

From delivering the spine-based system the client envisioned, to creating a modern atmosphere with KnollStudio pieces, the team achieved the client’s aesthetic vision. With virtually all the furnishings sourced from Knoll, save for a couple outdoor items standardized by the building, Knoll was able to extend very competitive pricing that allowed for many quality upgrades.

“We were able to achieve all the hot points Accela wanted,” said McNally. “It’s very open space with sophisticated furnishings. Each of the four lounge areas are furnished with a range of different KnollStudio and Knoll Office pieces.” “In the end, the new space is much more open, light and fun,” said Accela’s Lewis. “We went from space that was inflexible, inefficient and noncollaborative, to an environment that is open, collaborative and flexible.” Mission accomplished.

Customer Profile
Based in San Ramon, CA, Accela is a leading developer of software for government workers at local, state and federal level as well as their constituents worldwide.