This lavishly appointed pied-à-terre in Turin, Italy is located in a two-story 18th century villa. Brimming with stylistic influences from all corners of the globe, the flat was designed by the eccentric mid-century designer Carlo Mollino as a tableau to his wordly pursuits. The Rococo interior is defined by its complex mix of color, pattern and texture, introduced through exotic skins, wooded wallpaper, taxidermy and colored kilims. As a man of many cultures, Mollino mixed them all together with glee. “Mollino saw this apartment as a showcase of his understanding this life,” says Fulvio Ferrari, the elder of the father-and-son curatorial team who restored the residence to its original condition. “If you consider this life as some sort of education, you have to study to capture the beauty of the world and nature.”

Mollino's understanding of life included a command of modern design. The residence integrates staples of mid-century innovation with Mollino's expansive collection of antiques. As an early admirer of Saarinen's sculptural forms, Mollino chose to contrast different eras and styles using Saarinen's designs as an anchor. Six Tulip Armless Chairs and two Tulip Arm Chairs, for instance, surround the Greek column-supported table positioned beneath the lofted Japanese pendant lamp. In the living room, two Saarinen Side Tables are today taken as evidence of Mollino’s numerological obsession with pairs. Of the divide between outward appearance and idiosyncratic significance, Ferrari says, “This house should be considered on two levels, one that is the visible one, and the esoteric one, which is visible through symbols.” “This house should be considered on two levels, one that is the visible one, and the esoteric one, which is visible through symbols.”

Saarinen Side Table at Casa Mollino in Turin, Italy. Photograph by Bart Kiggen.

Mollino, himself, defies easy categorization. Eminently quotable—“Everything is permissible as long as it is fantastic”—and fabulously wealthy, Mollino studied architecture at Turin Polytecnico, although he completed few projects in his lifetime and only a handful of one-off furniture designs. As a result, he has become as well known for his secondary pursuits as for his primary vocation, namely his love of erotica, speed racing and the occult.

When Mollino died suddenly in 1973, the apartment passed into the hands of an engineer who used it for almost three decades, ignorant of its provenance. Today, it's a museum, which appears fitting, given Mollino's proclivity for self-memorialization. “He created this [house] for his afterlife, inspired by the Egyptian pyramids built for the perpetuity of the pharaohs,” concludes Ferrari. 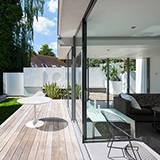 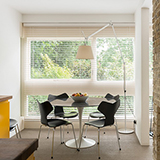