Pardo opens the video by observing of Salone: "I find a very calm tone and a relatively elegant tone, and a calmer palette associated with a lot of the things that are taking place."

Later, Krusin comments on the Krusin Collection 016, his latest collection of seating for Knoll, saying, "What we wanted was a chair that had real presence but at the same time was discreet and silent."

The Krusin Collection 016 includes three chairs: a seat with or without armrests and an armchair with an enveloping back. All three types are unified by the same base and are available in die-cast aluminum or solid ash in a range of finishes.

Krusin has collaborated with Knoll on impeccably designed and calibrated workplace pieces since 2011. Pixel™ by Marc Krusin, which Knoll introduced at NeoCon last year, received Best of NeoCon GOLD in the Tables: Training and Work category.

In Conversation
At Work with Marc Krusin 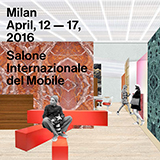 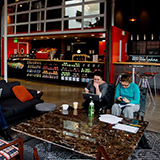