Pathmakers Moves to National Museum of Women in the Arts Works by Sheila Hicks, left, and Anni Albers are featured in Pathmakers.

Pathmakers: Wome in Art, Craft and Design, Midcentury and Today will open at the National Museum of Women in the Arts in Washington, D.C., on October 30. The exhibition, on view through February 2016, features women visionaries who have had lasting impact on modern design in a variety of media,  including Knoll textiles designers Anni Albers and Sheila Hicks.

Along with a wide selection of midcentury works, the exhibition also includes contemporary pieces chosen for their continuation of the early generation's themes. Pathmakers also presents visual biographies of the artist-designer's professional achievements.

The Museum of Arts and Design in New York City hosted the exhibition from April until September of this year, with the aim of reconsidering the contributions of women to the post-war visual landscape of the 1950s and 1960s. The exhibiton was featured on Knoll Inspiration.

Born in Germany, Anni Albers is widely recognized to be one of the most influential textiles designers of the twentieth century. Perhaps best known through Knoll for her pattern Eclat, she brought her innovative work to the Knoll Textiles Department in 1951 and collaborated with the company for 30 years.

American-born Sheila Hicks began her career as a painter, but began weaving while in Central and South America in the early 1960s. Throughout her celebrated career, Hicks consistently blurred the line between art, craft and design. She collaborated with Knoll International in 1966 to produce Inca, a woven upholstery that has been revived many times since. 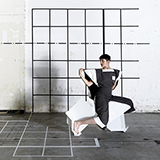 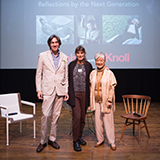 Knoll News
Bertoia, Nakashima, Schultz at Knoll: Reflections by the Next Generation 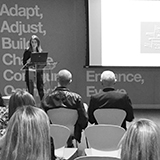 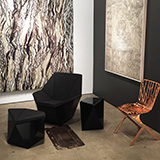