What's Mine is Yours is Ours

Planning for the New Experience-based Workspace 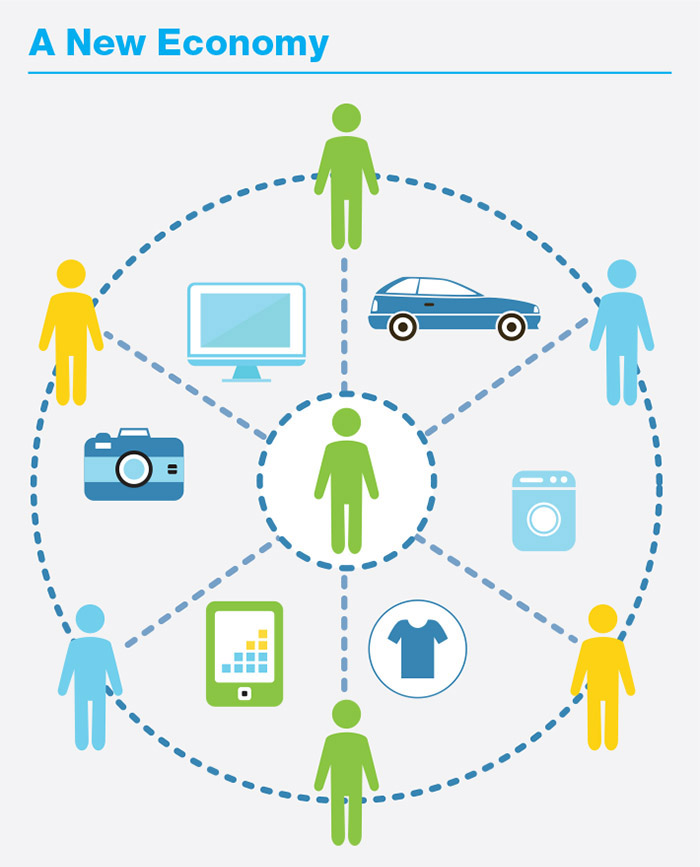 Figure 1: Societies have shared the use of goods and services for centuries, but raising costs and the introduction of new technologies, which make it easier for asset owners and those seeking to use those assets easier to find each other, have given way to a new sharing economy. 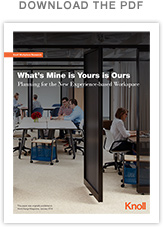 What might have seemed preposterous just a few short years ago – say, traveling in a stranger’s private car to stay at a stranger’s home – is now mainstream; the sharing economy has begun to be embraced by the populace.

Peer-to-peer sharing, also known as Collaborative Consumption, has disrupted not only the travel (Airbnb) and transportation (Uber) industries, but numerous other sectors including Fashion (Rent the Runway), Crowdfunding (Kickstarter), Skills (Taskrabbit) and Retail (eBay).

The Evolution of Co-working

In the mid-20th century, a consumerist society equated economic prosperity with ownership. Buying a car and a first home were major life milestones that created a sense of identity. Not so today (Figure 1).

According to a recent Harris study for Eventbrite, millennials are not as interested in owning a home or buying a car as baby boomers were at their age. For them, real value and a sense of identity is derived from experiencing, not possessing, perhaps not so surprising for a generation more accustomed to streaming music rather than owning it.

Studies have shown that fewer young adults have driver’s licenses, and that they prefer urban living, other forms of transportation, telecommuting and shopping online, and therefore have less need for cars reported Time.

At the same time, scaling down, right-sizing, living small or living mobile is on the rise as numerous blogs, television shows and magazines espouse living more with less.

With a decline in ownership comes a rise in experiences. Data from the U.S. Department of Commerce and the Bureau of Economic Analysis shows that since 1987, the share of consumer spending on live experiences and events relative to total U.S. consumer spending increased 70%, encompassing concerts, social events, athletic pursuits, cultural experience and events of all kinds, from haunted houses to fantasy sports camps (Figure 2). 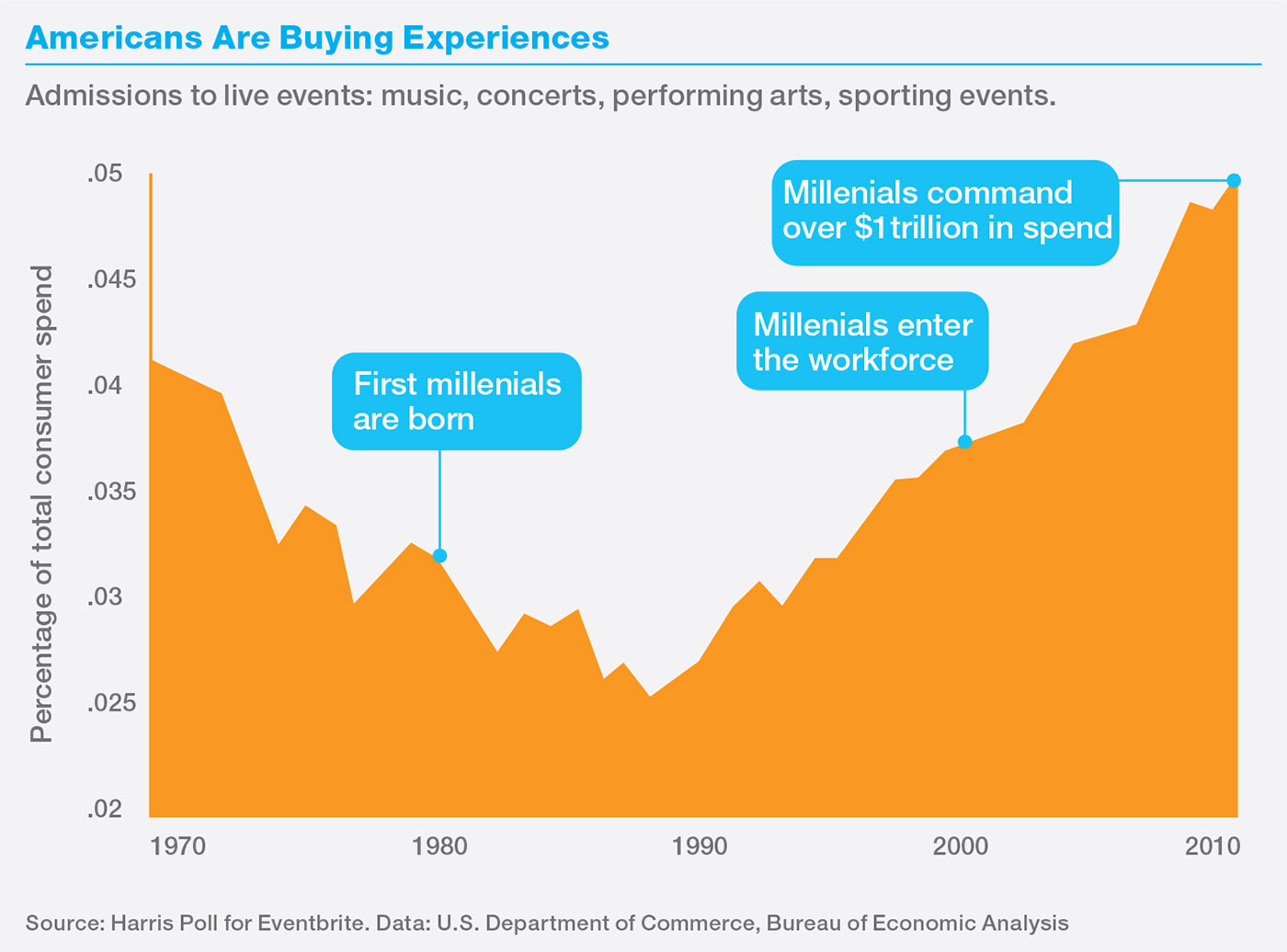 Figure 2: Alongside a decreased desire to own things or buy them through traditional channels, U.S. consumer spending on experiences continues to increase.

The Harris study found 78% of millennials would choose to spend money on an event or experience over purchasing something desirable, citing that such experiences connect them better with their friends, community and the people around the world (Figure 3).

Sharing and experience-focused brands can also offer customization, another trait appreciated by younger adults, who, with their strong sense of identity, like to celebrate their individual style.

Figure 3: The majority of millennials (78%) prefer collecting experiences rather than acquiring a tangible goods. 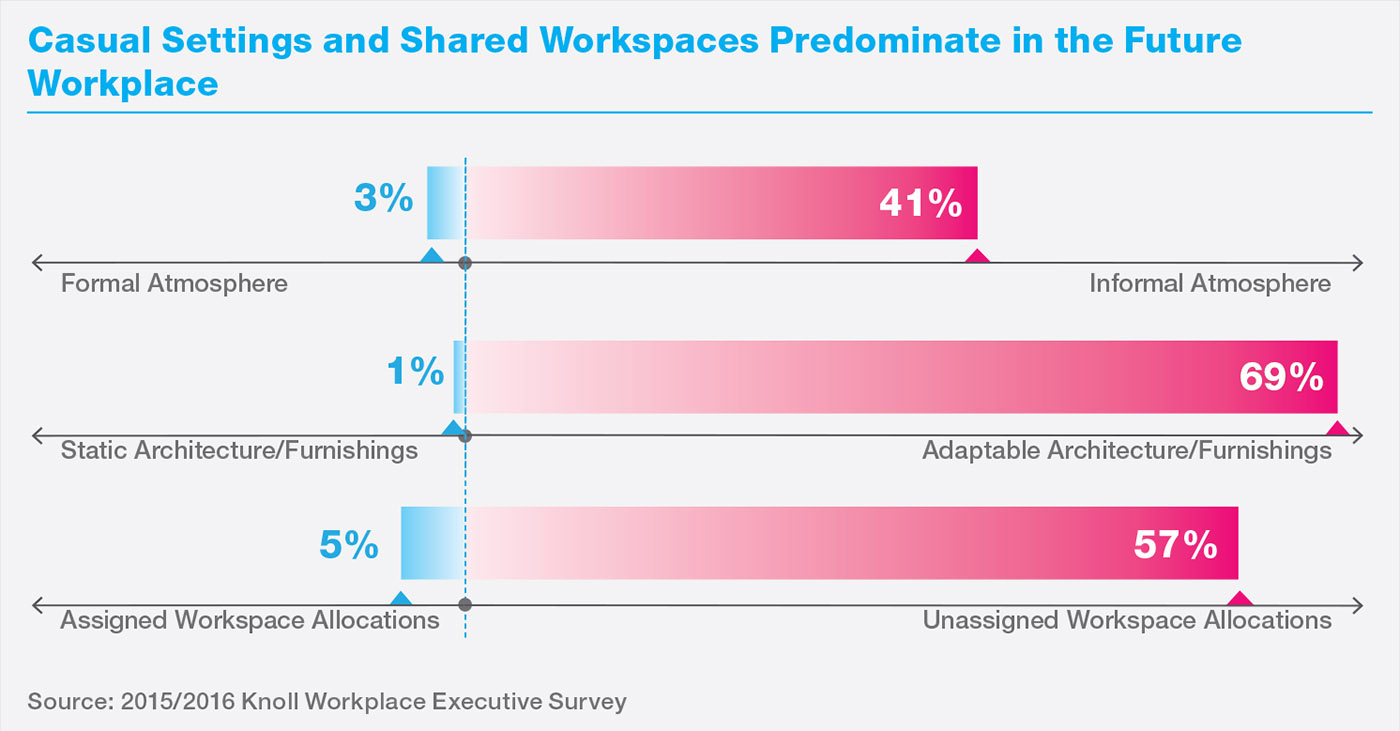 Figure 4: Workplace executives predict more relaxed standards in the future workplace, with a more informal atmosphere, even greater preponderance of adaptable architecture and furnishings and unassigned spaces within it. 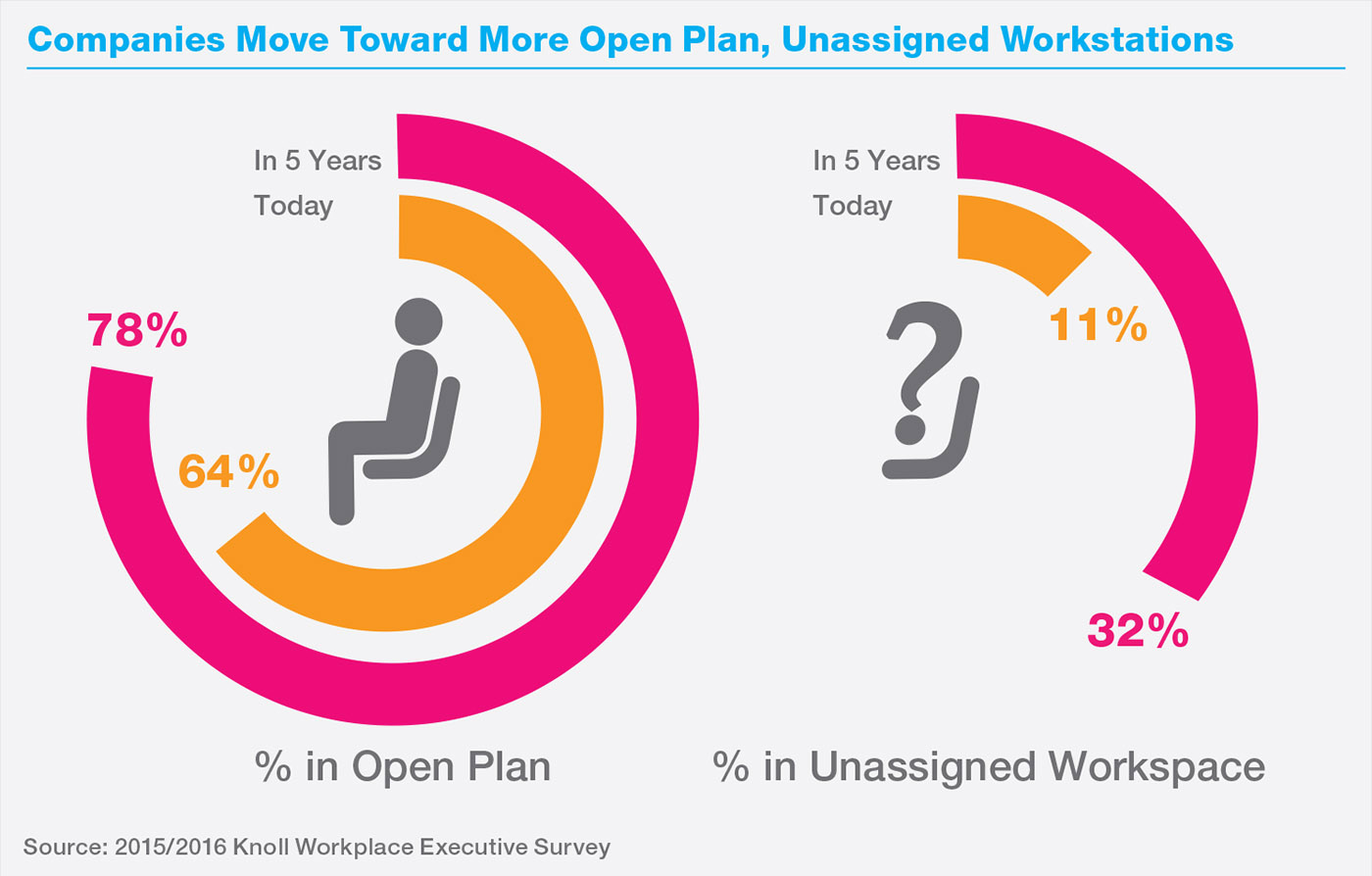 Figure 5: An increase in group work and an eye on real estate expense are driving a shift to open plan environments and greater numbers of unassigned workspaces.

Shift to Shared Spaces in Environments

A similar transition from “owned” to “shared” is underway within built environments, driven by the same factors of lower cost and user preference for customization, experience over ownership and connection.

As real estate costs have risen and profit margins shrunk, hoteliers were inspired to shift the allocation of space from individual rooms to common areas. Modeling strategies city planners use to design 24-hour neighborhoods, designers such as David Rockwell pioneered the trend of creating round-the-clock buzz by continually activating spaces such as lobbies, restaurants and communal spaces.

For example, instead of dedicated dining areas that would be closed for a portion of the day, they designed flexible spaces that could easily transform for other uses. Rather than dedicated business centers, lobbies were furnished with furniture that allowed guests to either work or lounge.

Space allocations are also shifting in the workplace for many of the same reasons.

As utilization rates drop, the cost of real estate rises and the nature of work becomes increasingly group-based, companies are re-thinking the people-to-desk ratio, abandoning the one-to-one model in favor of a higher proportion of unassigned seating.

Recent Knoll research revealed that 57% of companies foresee introducing more unassigned seating over the next 5 years (Figure 4), and the number of workers in unassigned workspaces is expected to nearly triple, rising to 32% of the workforce from the 11% today (Figure 5).

In our research into the evolving nature of work, we spoke to numerous companies across varied industries about the challenges encountered and strategies employed as they were testing, planning or rolling out variations of free-addressing with a reduced footprint and fewer individual spaces.

“We have four desks for every five employees, but we make sure that when someone comes to the site, they will always be able to find a desk space, whether or not he’s in a group, a departmental zone or collaborative area,” a pharmaceutical executive reported.

“Having the flexibility of the furniture, the collaborative group furniture, the office seats, it allows all of those eventualities,” he added. One technology firm was focusing in on the under-utilization of cafeteria areas outside of lunch hours, and is planning to solve its issue by fading the division between cafeteria use for lunch and for group space.

Another technology executive shared that while his firm provided drop-in desks for remote workers, the mobile employees often elected to work in a social space. “A lot of those people just sit at a café table for the day. We have a pretty agile workforce that doesn’t need a standard desk to be able to do their job most of the time. By providing these flexible spaces, we can usually meet their needs pretty well,” he explained.

Reallocating spaces from individual usage to shared group activities suits a highly connected and mobile worker who spends more than half their day in group work and away from a primary workspace. It also suits those generations without ownership expectations, as Knoll discovered in another study. 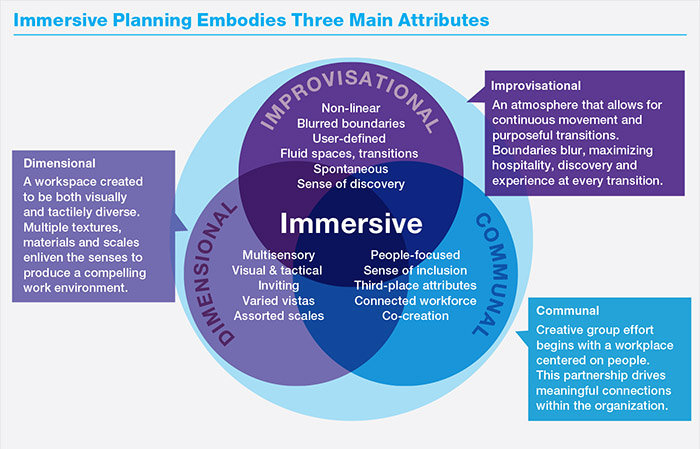 Figure 6: Comprised of three fundamental elements—Improvisational, Communal and Dimensional—Immersive planning cultivates an environment in tune with today’s group-based workstyle and an experiential workplace.

Immersive Planning – A New Way to Think About Space

Our latest research identified a new way to think about space and a planning approach that puts people’s experiences at the center.

Known as Immersive planning, the model serves a modern workplace in which lines blur not just between work, life, learn and play, but also individuals and teams, primary workspaces and activity spaces, and owned and shared work areas and tools (Figure 6).

Immersive planning diverges from a proportional, activity-based planning model designed to support work tasks and functions. Instead, it draws from a holistic point of view to accommodate a range of social and creative experiences (Figure 7). It creates a fluid environment in which workplace architecture, furnishings and people are linked and where activity and primary spaces can be one in the same.

Connected spaces and workers promote a sense of sharing and inclusion in an environment where little formal ownership of specific elements exists, resulting in a collaborative office where people own and share all spaces equally and where teams not only thrive, but generate ever higher levels of innovation and productivity.

As organizations everywhere are challenged to keep pace in a more complex business environment, they are seeking out new ways to heighten innovation, build employee camaraderie and support the ever-changing needs of their global workforce.

Figure 7: Changing workstyles and the influence of startup culture have reshaped the role of the workplace from a static building to a highly interactive experience.

The workplace must stay in stride.

Immersive planning is fluid enough to adapt to fluctuating teams and project-based work. It delivers a group-based environment built around shared spaces and tools, not individual possessions. It’s a model particularly appealing to workers with a mindset in which ownership takes a back seat to the overall experience and social interaction.

It supports people and the flow of information by offering them choice and mobility in where they want to work. By allowing them to adapt the space they need, it provides the customization opportunities that contribute to a sense of identity, another trait highly valued by today’s worker.

Inspired by the warmth of hospitality, creating diverse experiences and enhancing interaction along the way, Immersive is a model in tune with a rapidly evolving workplace and the generations who will occupy it.

To read the full Knoll report on Immersive Planning. From Research to Realization: An Experience-based Workplace, click here.

•   Knoll. 2016. Immersive Planning. From Research to Realization: An Experiencebased Workplace