Ross Lovegrove, an industrial designer recognized for forward-thinking, organically-inspired products, brought his distinctive aesthetic to Knoll with the Sprite™ Stacking Chair — his take on the quintessential molded plywood side chair.

Looking to add an affordable and flexible design to the side chair category, Knoll collaborated with British industrial designer Ross Lovegrove.

Inspired by classic Scandinavian molded plywood chairs from designers like Alvar Aalto and Arne Jacobson, Lovegrove designed a chair that was simple without being plain, exciting without being aggressive. He distinguished the chair from similar designs with an expansive library of finish options and the unique option of selecting different surfaces for the inside and outside of the chair.

With its relatively quiet form and vast styling options, the chair is highly adaptable to varied settings and decors. From sophisticated to flamboyant, subdued to vibrant, Sprite can do it all. 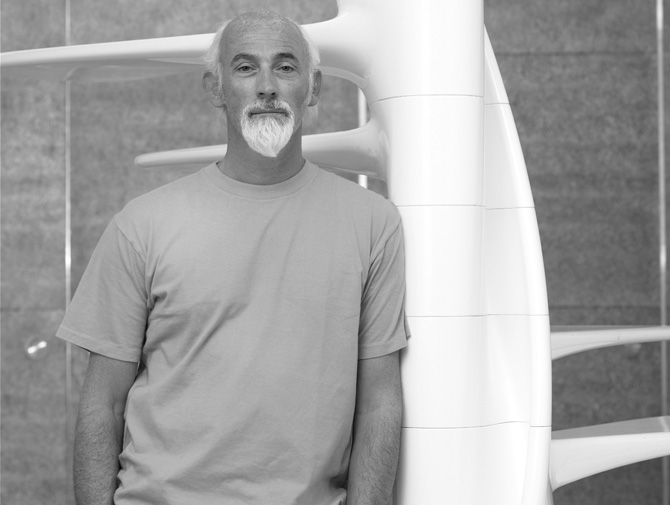 Ross Lovegrove is known in the design industry for integrating aspects of high-technology with more traditional design ideas in order to create objects that are as much a piece of art as they are a functional component of the modern environment. His portfolio includes several notable projects, including the design of the Sony Walkman and work with Apple computers. As a consultant, Lovegrove has worked with Luis Vuitton, Cacharel, Dupoint, and Hermes, among others. In 1990, he set up his own design office in London, called Studio X.

Lovegrove contributed substantially to the development of the Alessandri Office System as an in-house designer for Knoll International in Paris. Knoll entered into the plywood stacking chair market with his Sprite Chair, introduced in 2004. His most recent contribution, the Lovegrove Collection, is a playful celebration of form and material, perfectly in line with the Knoll tradition.

Today, Lovegrove remains an active and prominent figure in the design world.