Contract interviewed David Rockwell, the founder and principal of Rockwell Group, on June 6, 2016. The award-winning firm collaborated with Knoll on an expansive workplace collection that is reorienting the conversation about workplace planning toward one based around ever-flexing experiences. The collection, Rockwell Unscripted, will be on view in the Knoll NeoCon Showroom at NeoCon 2016, the annual contract furniture tradeshow in Chicago from June 13 - 15. David Rockwell, who works most often in the people-centered environments of hospitality and set design, will deliver the keynote speech at NeoCon 2016.

"Companies need spaces that encourage creativity and crosspollination of ideas more than ever before," Rockwell told Contract. "Hospitality-influenced elements, such as an open, flexible lobbylike space or niches where employees can lounge and socialize, encourage serendipitous encounters and aha moments."

Rockwell spoke about applying the firm's underlying interest in "theater and transformation" to new projects, including in the collaboration with Knoll. He described Rockwell Unscripted as "a comprehensive collection of set elements that adapt to the spontaneous choreography of a work environment."

"The collection relies on a theatrical analogy to explain how one's space can be easily reorganized around three or four different activities, from individual work to team meetings, over the course of the day," he continued.

Read the full interview on Contract. 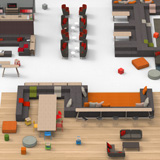 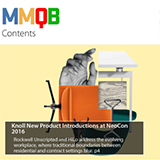