A comparison of architecture and furniture reveals Saarinen's sculptural pursuits

Before he was a world-renowned architect and furniture designer, Eero Saarinen trained as sculptor, studying at the Académie de la Grande Chaumière from 1930 to 1931. “That was Eero Saarinen's first love, really: sculpture rather than architecture,” Tracy Campbell, author of the The Gateway Arch, told NPR. Saarinen ultimately followed in his father Eliel’s footsteps to become one of the 20th century’s greatest architects. But it is not difficult to find loud echoes of Eero’s sculpture background in his approach to form and material at both the scale of a building and the scale of a chair. “That was Eero Saarinen's first love, really: sculpture rather than architecture.”

Eero Saarinen as a student of sculpture in Paris, 1930. Image courtesy of the Manuscripts & Archives, Yale University Library.

Eero Saarinen took full advantage of contemporary advances in industrial manufacturing and materials, which enabled the sculptural, dynamic forms that mark some of the Finnish architect’s most recognizable pieces of furniture  (Womb Chair, Tulip Chair) and buildings (TWA Terminal, Gateway Arch). In furniture, bent plywood and heavy plastics provided the figurative clay that he found, on the scale of a building, in poured concrete and steel.

While Saarinen saw architecture and furniture design as posing unique sets of challenges and solutions, he had an all-embracing notion of the totality of design. “I believe very strongly that the whole field of design is all one thing,” Saarinen once proclaimed.

What follows are three of Saarinen’s buildings, designed between 1956 and 1965. Viewing his furniture designs alongside these buildings, one may find those echoes from Saarinen’s sculptural training, whether it be a chair or office tower. “If there was a distinction between his architecture and his furniture designs,” writes design scholar Brian Lutz, “it was one of invention, not inspiration.”

Located in Warren, Michigan and composed of five buildings, the General Motors Technical Center put Saarinen on the map. Although the complex was said to show the influence of Mies, Saarinen contended the design carried forward “the tradition of American factory buildings” of the Midwest. “The design is based on steel—the metal of the automobile,” Saarinen said of the center, “Like the automobile itself, the buildings are essentially put together, as on an assembly line, out of mass produced units.” “The design is based on steel—the metal of the automobile.”

Saarinen believed that for the end user, the interior environment is as important as the building that contains it. His furniture, designed in close collaboration with Florence Knoll between 1948 and 1958, reflects careful consideration of how space is occupied by a person and by a chair. “The chair is a three-dimensional object always seen within a room, which is essentially a box. How do you best relate this object to the box?” Saarinen asked. As opposed to early modernists like Marcel Breuer and Le Corbusier, whose designs Saarinen admired but thought of as “box-like” solutions, Saarinen saw potential in exploring furniture's relationship to its environment as “a sculptural one, not a cubist, [or] constructivist one.” The construction of the Technical Center coincided with the release of the first Saarinen’s major furniture designs—notably the Model 71 and Model 72, or Saarinen Executive Arm Chair and Saarinen Executive Armless Chair. Released and marketed as the 70 Series, the collection was billed as a cohesive package, designed to support the various functions of a corporate interior. Some models were designed to address specific needs associated with the GM project, including Saarinen’s secretarial and draftsman chairs, Model 76 and Model 77, respectively. The double-wide Womb Settee was another product intended to furnish the Technical Center. “Like the automobile itself, the buildings are essentially put together, as on an assembly line, out of mass produced units.”

An interior lounge area at the General Motors Technical Center designed by Eero Saarinen, 1956. Image from the Knoll Archive.

Contrasted with the architectural envelope, these chairs exhibit a greater sensitivity to the natural curves of the body. Intended to suit and frame the sitter, the 70 Series responds to such cues while remaining adaptable within the space. In his words: “Though we use mass-produced parts in architecture, a building is custom-built to the extent it is a solution of a specific problem. In furniture design, the client is Everyman.”

The now defunct TWA Flight Center in New York City remains a monument to space-age aviation. “We wanted uplift,” Saarinen said of the design, “[an] architecture that would express the drama and specialness and excitement of travel.” With wing-like vaults that soar upwards, “the fact that it looked like a bird in flight was really coincidental,” Saarinen admitted. Instead, the interacting barrel vaults were meant to “reveal the terminal as a place of movement and transition.” “If there was a distinction between his architecture and his furniture designs it was one of invention, not inspiration.”

Aiming to create a dynamic space, Saarinen insisted that “all the curvatures, all the spaces and elements, would have to have one consistent character.” Accordingly, the terminal was populated with many of Saarinen’s designs, which afforded the head house interior the consistency Saarinen desired. The restaurants featured Tulip Armless Chairs and Executive Armless Chairs; the waiting rooms were dotted with Saarinen Side Tables and Saarinen-designed ashtrays. But the building’s fundamental sculptural character is perhaps expressed by the Womb Chair, from whose ample seat travelers could take view of departing flights. Among the most enveloping and curvaceous of Saarinen’s designs, here, the Womb Chair serves an architectural end. “The scale of the Womb Chair was thought of as having architectural value," Saarinen wrote. "This larger form could make a transition to the loose furnishings.”

More sculpture than building, the Gateway Arch in St. Louis, Missouri, is Eero Saarinen’s most essential form, a pure catenary curve. A memorial to Thomas Jefferson and symbol of Westward Expansion, the arch remains the tallest man-made monument in the western hemisphere and a marvel of modern engineering. In spite of repeated efforts to expedite construction, almost two decades would come between the approval of Saarinen’s design and the project’s completion. Submitted as part of an open competition, Saarinen's design was considered alongside 170 other proposals, including his father Eliel Saarinen’s. When the Saarinen household received a telegram announcing the verdict, Eero mistakenly opened a bottle of champagne to celebrate his father, thinking his design had been selected. Two hours later, a subsequent telegram clarified that Eero, in fact, had won. Saarinen’s earliest models show the parabolic design as a four-sided arch made out of concrete. A sculptor friend of Saarinen’s, who had worked with Rodin, encouraged him to pursue the more graceful three-sided curve. Having arrived at a shape that seemed to "have permanence and belong to our time," the question became what material would satisfy a similar criteria. Saarinen opted for stainless steel in order to emphasis the monument's “upward-thrusting form,” in lieu of an “earthly-bound one” suggested by concrete. “I look forward to the day when the plastic industry has advanced to the point where the [Pedestal Collection] will be one material, as designed.”

The Gateway Arch’s form is perhaps most mirrored on the scale of furniture in the Saarinen Side Table, the Pedestal Collection’s most slender iteration. Inspired by a drop of high-viscosity liquid, Saarinen intended the design to be one piece—as seamless in appearance as the St. Louis arch. Instead, the pedestal had to be attached to the table’s top, but Saarinen never stopped dreaming of the singular form he desired: “I look forward to the day when the plastic industry has advanced to the point where the [Pedestal Collection] will be one material, as designed.”

All images are courtesy of the Knoll Archive unless otherwise noted.

All quotations attributed to Eero Saarinen are from Eero Saarinen: On His Work, published by Yale University Press, 1968. The book was compiled by his wife, Aline Saarinen, and brings together his personal writings, correspondence and architectural documents. 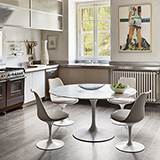 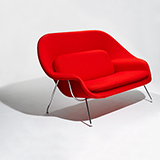 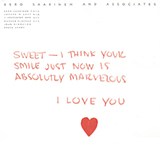