Generation by Knoll®: A Revolutionary Collaboration Between Knoll and Formway Design Recognized for its Flex Back Net and smooth, figure-eight frame, the award-winning Generation by Knoll® has not only redefined task seating design, but has also set a new bar for ergonomics. The result of a second collaboration with New Zealand practice Formway Design for Knoll, Generation is the synthesis of the core concerns of its market: sustainability, ergonomics, and modern materials. Debuted in 2009, Generation introduced a radical way of thinking about workplace furniture—putting the user, rather than the task, at the forefront of any design.

After the success of the 2002 Life® Chair, Formway began their next design for Knoll by focusing on what standard office seating was not supposed to perform, an approach they coined “designing outside of the chair.” In other words, they looked at what people did with their chairs when not sitting directly in front of their computers. Formway’s Life represents an early result of “designing outside of the chair”—the task chair introduced a mechanism that senses the weight of its user and automatically adjusts the tilt tension for the respective weight. The result was a uniquely intuitive office chair, and it was this notion of intuitive office furniture that both Knoll and Formway strove to push further. Generation by Knoll in the making. Image from the Knoll Archive.

When computers first came into the public life of the office, they came in the shape of a desktop—a big, heavy, plastic machine that permanently sat on your desk. Recognizing its powerful instrumentality to a range of applications, the computer became the symbol of a new, technologically-driven productivity. Consequently, task chairs evolved to facilitate a singular relationship between human and computer. In their research, Formway noticed that “sitting is seen as an instruction, head down, back straight, now get to work.”

“Most chairs place the body in a default, neutral position. Sitting is seen as an instruction, head down, back straight, now get to work.”

As technology evolved, the desktop continued to shrink in size until it became the laptop. Conversely, the task chair remained rather unidirectional in its range of motion, maintaining its one-to-one relationship with the desktop. Fast-forward to the present, where mobile technology has ushered in a new way of working in which one is no longer tied to the desk by his or her computer. Along with computers, improvements in Wi-Fi technology allowed individuals to remain connected anywhere within the office. Rather than being fixed items that restricted movement, computers increasingly became tools for more mobile collaboration, forcing us to get up, come back, swivel, recline, lean in, side saddle, and much more. An early, scaled down mock-up of Generation. Image from the Knoll Archive.

As a first step, Formway went out into the field to observe and document how office workers were actually using their chairs. They concluded that the various minute shifts in posture they recorded were not signs of boredom, but rather essential activities that facilitated a range of individual and collaborative tasks. The stage was set for Formway to design a truly, one-of-kind task chair.

To accommodate every observed posture, Formway needed an elastic material that was both durable and comfortable, and would respond to the growing importance of sustainability. A task chair that had some amount of flex built into the framework, however, was not a new concept—Don Chadwick’s and Bill Stumpf’s Aeron Chair had been around for a decade by the time Formway began working on Generation. However, the goal was to build an elastic back that offered support in every imaginable direction, in addition to being lighter and more sustainable. Whether or not Formway was directly influenced by the ubiquitous bean bag chair of the 1960s, such a product seems to foreground the design goals for Generation by Knoll. When a user shifts his or her position in a bean bag chair, the internal “beans” automatically rearrange themselves in all directions without compromising support. Generation by Knoll was to have the same multi-dimensional, automatic responsiveness. The New Zealand based team at Formway Designs reviews a full-scale rendering of Generation. Image from the Knoll Archive.

In 2005, Formway presented preliminary designs of Generation to Knoll. One year later, in October of 2006, the first prototype was built. Although the prototype was more of a boxy skeleton than the curvy chair we know today, many of the design challenges had been accounted for—movement, support, comfort. Amongst many of Formway’s research conclusions was one that argued that their chair should not impose an ergonomically correct posture, but rather, challenge the meaning of “ergonomically correct.” The design team discovered that people, even though they purported to assume ergonomically correct postures, were constantly shifting around according to their current task. Consequently, Formway had to design a task chair where every imaginable posture could be deemed as ergonomically correct—an important distinction from a task chair that imposes a single, “proper” sitting position.

After extensive research and revision, Formway and Knoll agreed upon a material that would check every box of their design goals. Originally used as hinges on dishwasher doors and ski boot straps, the selected pliable high performance elastomer offered the flexibility and durability necessary for an automatically responsive chair. The Generation Flex Back Net was an entirely new material to the furniture industry. The durability of the new high performance elastomer allowed Formway to do away with a rigid, metal framework and design a semi-rigid plastic framework that would provide comfortable support across the whole back. The elastomer backing was then seamlessly joined to a figure-eight frame that enables multidimensional movement—a feature that, to this day, makes Generation a leader amongst ergonomic chairs. Generation's structure incorporates the flex of the elastomer into its very own semi-rigid framework. The top of the figure-eight structure bends a full 90° that, when upright, is supported by the pull of the elastomer. Generation is not part-framework, part-skin, but rather a highly functional synthesis of the two. In line with the modernist ideals historically espoused by Knoll, form and function are essentially one—the backing requires the rigidity of the structure, and the structure requires the flexibility of the backing.

The innovative high performance elastomer, in conjunction with the flex seat, leads to a product that offers support and comfort to the widest array of postures—taking into account the changing nature of the work environment. The streamlined design allowed Formway to assemble the chair with one-third of the amount of parts compared to a typical task chair. Weight was decreased and durability increased thanks to a simpler, less bulky tilt mechanism. Quite fittingly, Florence Knoll’s dedication to clarity of design is held strongly at the core of Generation, pushing the boundaries of what it means to be modern in an ever-changing world.

“Generation by Knoll moves as you move. It flexes as you change position, responding to what you do naturally. Generation is a chair that follows your lead.” The story of Generation by Knoll does not end with its innovative design. Working in a new era, dedicated to conserving natural resources, the team at Formway and Knoll were committed to building a product that would make use of as many recycled materials as possible. The design team at Formway reached far beyond their goals and ended up with streamlined product that did not just use recycled materials, but significantly cut down on the number of parts used. To use recycled materials is a step in the right direction, but to simply use fewer parts from the beginning leaves a much smaller footprint. Affirmed by the numerous awards it has received since its introduction, Generation by Knoll makes clear that sustainability is now an integral concern in design innovation. Our task chair is where we work, where we eat, where we socialize, where we relax, and where we think. Add to that an increasingly talented, growing and mobile workforce, and your desk becomes anywhere your chair will go. Generation by Knoll solved many unprecedented workplace challenges, offering a new standard of comfort and unrestrained movement—making it truly a product of this generation. ♦ 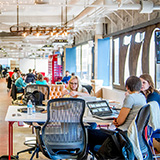 Research
The Rise of Co-working 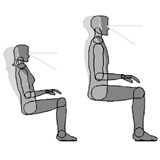 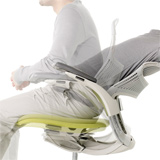 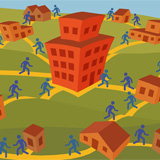 Research
Five Trends that are Dramatically Changing Work and the Workplace 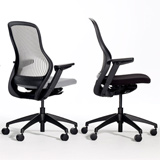 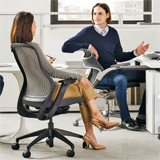