Classic and contemporary furniture fill the home of a collector

Classic furniture from Knoll, including designs by Mies van der Rohe, Eero Saarinen, and Warren Platner, was featured in the May / June 2017 edition of Dwell magazine, in an article on the abode of collector George Marrone. With an impressive array of furniture in his Delaware mid-century modern home, Marrone and his distinctive bulldogs Sasha and Sophie were previously featured on Knoll Inspiration. Speaking with Dwell, Marrone recounted his years of experience collecting mid-century modern furniture at auctions and estate sales, eventually amassing a collection that was too large to fit in his previous home. The Delaware residence he recently purchased and shares with his partner Michael is similarly the result of a deep-seated interest in mid-century modern design.

The living room boasts, among other designs, a Barcelona Couch by Ludwig Mies van der Rohe, a Womb Chair and Ottoman by Eero Saarinen, a Petal End Table by Richard Schultz, and an Arm Chair by Warren Platner. On the iconic Womb Chair, Dwell provides a bit of history: "Fiberglass was a technical byproduct of World War II that promised a variety of civilian applications, from suitcases to sports cars. The Womb Chair was the first mass-produced furniture piece to be made of the new material, although this fact isn't widely known because its single-piece fiberglass shell is covered in upholstery. Instead, the chair is famous for its comfort. Its wide, organic arms accommodate a range of relaxed seating positions." 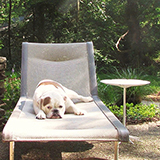 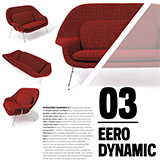 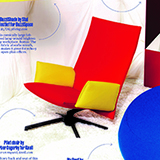 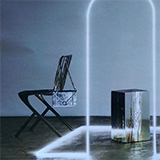 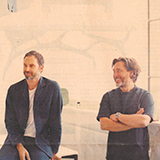 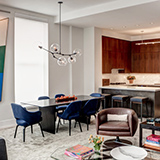