On Thursday, October 26, Linda Kasper, Knoll client services manager, delivered the final lecture out of a series of four at the Art as Change exhibit. The exhibit offers a rare snapshot of the late 50s, 60s, and early 70s, a period of intense expression and exploration that pushed all traditional boundaries and became catalysts for broader movements. Art as Change was a finely curated expose of privately-owned art and design pieces, ranging from “Summer of Love” posters to iconic works by Warhol, Wesseleman, and Lichenstein to the familiar works of Bertoia and Breuer.

While much of the artistic expression listed above was a response to a renewed social consciousness that led to political activism, civil rights, women’s liberation, and a culture of global awareness, the same works also made up the Modernist movement. Fittingly, Kasper’s lecture, titled "Knoll: Defining Modern," offered a brief history of modernism, past and present, as it applies to both Knoll and the greater historical timeline. In addition, in honor of Florence Knoll’s centennial, Kasper touched on the founding of Knoll and Florence Knoll’s drive and legacy, stressing the importance of Florence Knoll as a successful business woman during the women’s liberation movement. Kasper commented, “the audience was engaged, and the questions were plentiful.”

The exhibition featured the work of Knoll iconic designers Harry Bertoia, Ludwig Mies van der Rohe, Eero Saarinen, Warren Platner, and David Rockwell. The furniture served as both individual classics and as chapters of the greater story of the company’s modern design. Starting with Mies van der Rohe and ending with David Rockwell, modernist themes such as line, simplicity, and craft can be seen throughout, proving the lasting impact of modernism.

Art As Change was on view at the Chester County Art Association located in West Chester, Pennsylvania from October 13 – 29. The three other lectures that preceded "Knoll: Defining Modern" were "Voices from the Vietnam War Era" (10/17), "A Social Justice Conversation" (10/19), and "Summer of Love & the Music" (10/24).


Knoll News
Curtain Up! in Montreal 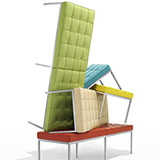