The New York Times chronicled Florence Knoll’s extraordinary life, from her precocious interest in architecture as a student at the Kingswood School for Girls to her leadership of Knoll and transformation of the Modern workplace. Authored by Robert D. McFadden, the Times describes Florence as, “a pioneering designer and entrepreneur who created the modern look and feel of America’s postwar corporate office with sleek furniture, artistic textiles and an uncluttered, free-flowing workplace environment.” McFadden notes “Shu’s” unique ability to bring together her many collaborators – each with diverse talents, from sculptor Harry Bertoia to architect Eero Saarinen – to create exceptional design. In addition, the Times references the eponymous exhibition “Florence Knoll Bassett: Defining Modern” at the Philadelphia Museum of Art and her receiving the National Medal of the Arts in 2003.

McFadden also poignantly describes Florence Knoll's contributions to the rise of American Modernism and the enduring influence of her work. “To connoisseurs of Modernism, the mid-20th-century designs of Florence Knoll, as she was known, were – and still are the essence of the genre’s clean, functional forms,” writes McFadden, “Transcending design fads, they are still influential, still contemporary, still common in the offices, homes and public spaces, still found in dealers’ showrooms and represented in museum collections.” 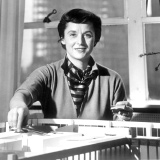 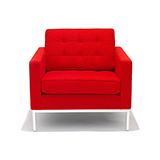